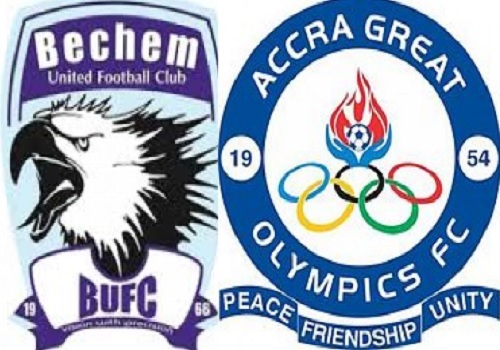 On Sunday, the Bechem Park will witness a blistering encounter between Bechem United and Accra Great Olympics. Coach Prince Koffie popularly known as ‘Flavour’ will lead his lads 322.5km North West to Bechem in the Tano South District of the Ahafo Region.

The hunters having lost their previous game away to Inter Allies are coming into this game with a lot of hope and enthusiasm since they’ve scored at least a goal in all of their two games thus far. Especially when their opponents are yet to register a league goal this season after losing 3-0 away to Ash Gold and one-nil at home to Aduana Stars. Be that as it may, we have to agree that any team in the premier league could lose all those two games consecutively since both of them are genuine title contenders.

Truth be told, per evidence of what was seen at the Accra Sports Stadium against Aduana Stars, Olympics was very unlucky not to have walked away with at least a point after brilliant display from Gladson Awako, the former u20 world cup winner.

Bechem United have always won at home against the ‘Agorsu’ club in their two previous encounters at the Bechem Park. It is therefore not surprising that the bookmakers gave Bechem United 1.35 odds to win on Sunday. A win for Bechem sounds good but the truth is they are going to suffer to get a win. The ‘Rosalinda’ club is fully aware of the problems they are likely to encounter if they lose three games in a row.

I predict a full time draw in this encounter or a double chance win or draw for Olympics at a very juicy odd. Both teams to score is another option punters could choose.