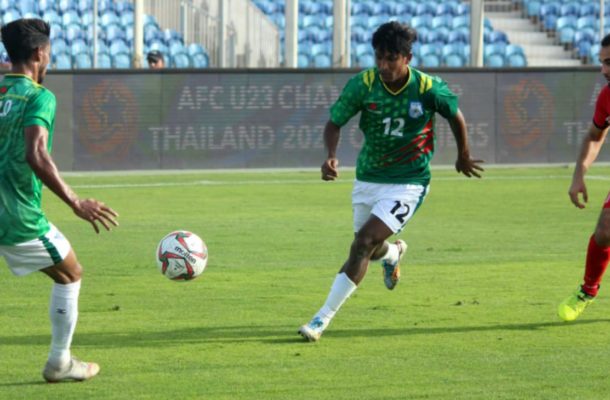 Manama: Palestine took a step closer to the Finals after defeating Bangladesh 1-0 in their AFC U23 Championship Thailand 2020 Qualifiers Group B match at the Khalifa Sports City Stadium in Manama, Bahrain on Sunday.


Palestine are on six points, having blanked Sri Lanka 9-0 on Matchday One and will face Bahrain in their final tie on Tuesday.

After their opening match high, Palestine were oozing confidence when they took to the pitch against Bangladesh, who had suffered a narrow 1-0 defeat to Bahrain on Friday.

The South Asians needed to win to keep their hopes alive and just as they had been against Bahrain, Bangladesh were resolute against Palestine.


Palestine, however, started the better of the two sides and took the lead in the 22nd minute through striker Hani Abdallah.

That, however, was to be the only goal as Bangladesh could not make any inroads in their bid to salvage the points.