PHOTOS: Queues formed across Piccadilly Gardens for food sold by a Ghanaian family 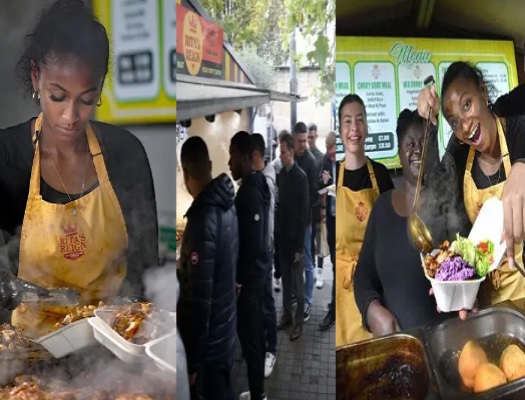 Are you a Ghanaian living in another country who is wondering how to make things work for you? Well, you could consider opening a food joint and cooking quality food for those in need; this could be your breakthrough.

A Ghanaian woman and her family are making headlines across England, thanks to their food stall in Piccadilly Gardens.

It's possible you saw it, Rita's Reign, is located on Piccadilly Gardens, and it is the one where customers typically line up from the food market all the way to the Market Street tram stop.

Rita Linsdell, who manages the Popular restaurant, revealed to the Manchester Evening News that she is originally from Kumasi in Ghana's Ashanti Region.

Rita revealed that she comes from "a cooking family." She disclosed that her husband Darren, her two daughters, Olivia and Leya, her sons, Isaac and Matthew, all reside in the same home in Mottram and work for the family business.

Every week, from Wednesday through Sunday, the line begins to form around 11 a.m. By lunchtime, it is obstructing people's ability to move through the gardens. Some might even unintentionally become entangled in it and end up eating their lunch. This is not a problem.

Rita serves up a menu that shouldn't be particularly uncommon, but for reasons best known to the cosmos, you don't often see both Caribbean and African cuisine being served at the same time. As a result, Rita's menu consists of a combination of Caribbean curry goat and jerk chicken (a huge box for a great value £7), along with rice and peas and jollof rice, taking the customer on a journey from the West Indies to West Africa (Ghana and Nigeria) and back.

She tells Manchester Evening News that jollof rice was a special occasion dish when she was a child. "For Christmas or parties, at least that's how it was in Ashanti where I grew up. However, every person has a unique method of doing things.

Most likely, the scotch bonnet pepper, which is used in both Ghanaian and Caribbean food, is where the two cuisines collide. Although they can be extremely hot when used carelessly, there is nothing that tastes quite like them. In Ghana, they are more commonly known as the Kpakpo Shito pepper.

“I grew up cooking, probably from around the age of eight,” she says, adding “We were just a cooking family. It’s what we did.” Her mother taught her most of the recipes she still uses today, including the jollof rice that is spiced with ginger, garlic, bay leaves, thyme, and tomatoes and onion.

Rita arrived in the UK on August 31, 1985, and she is certain of the day's exact time. When she was 18, her mother had moved the family to Manchester after getting married to an Englishman. In addition to working at Smithfield Market and brushing up on her English, she enrolled in college and got up at five in the morning to wash pots in the cafe that served breakfast to the hungry market workers.

She then worked in a variety of food vans, first flipping hamburgers at Old Trafford and later for Porky Pigs creator and Manchester fast food legend Eddie Osman. Working for the Porky Pigs and other stalls on Piccadilly Gardens for about ten years, she gained a lot of knowledge from him. She chuckles, "I'm like everyone's aunt on the market.

For her church group, she made her own Ghanaian food, but it wasn't until she opened up her own stall three years ago that she made her skills known to the general public. Since then, it has increased, with her family gradually chipping in to assist her in meeting the escalating demand.

Leya, their eldest child, has since established her own career and, while pursuing a law degree, was able to launch Piccadilly Bakes, a cake shop right next to her mother's.

Is cohabiting and working difficult? Without giving it a second thought, Rita replies, "Yes!" while also grinning. It's challenging, but it's good. But she claims that by the time they get home, all of the stresses and strains from the day have dissipated.

Expansion plans are already well under way. They initially prepared food for the stall out of their home kitchen, but as business increased, they had an addition built and installed a much larger catering kitchen. They have outgrown that and are currently building an industrial kitchen inside a container unit, which ought to be completed by Christmas.

Rita wants to gradually expand the menu to include more dishes from Ghana. Like peanut soup, a favorite at home stew made with chicken and peanuts that is served with fufu, a stiff, gooey cassava-based oatmeal-like side dish. Let's hope Piccadilly Gardens can handle the lines when she does.