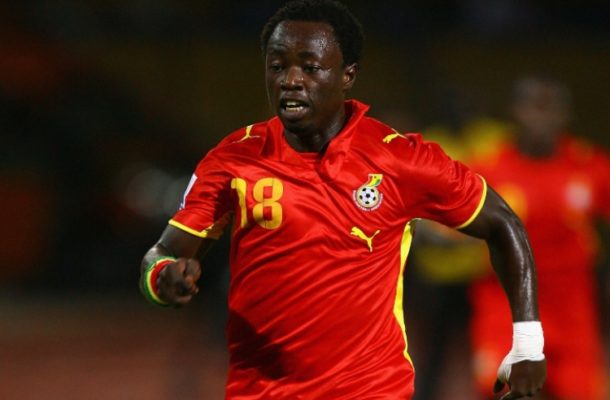 Former Ghanaian Youth International Ransford Osei has become one of the youngest players to quit the game  after unexpectedly announced his retirement from professional football at the age of 30.

The 2009 World Cup Winner made this declaration in an interview with Humble Ike on his YouTube channel with his revelation coming as somehow a shocking one to most Ghanaians.

The last time the ex- Starlets forward played actively was in 2018 during his short spell with Lithuanian outfit FK Palanga and has not played for the past two years.

He was part of the Black Starlets squad that finished fourth in the FIFA U17 World Cup which was held in South Korea finishing second on the top scoring chat with six goals finishing ahead of German football icon and Real Madrid star Toni Kroos, who eventually won the MVP of that tourney.

However, won top scorer of the 2009 African Youth Championship which was held in Rwanda netting seven goals in that particular tournament notably that brace against the young Indomitable Lions of Cameroon in the final.

The striker was recognized by World Soccer Magazine as one of the 50 Most Exciting Teenagers on the planet in their November 2007 Issue.

But his professional career only had to laat for 14 years as he suddenly come to an end with the 2009 African Youth Championship top scorer hanging his boot in crushed dreams.

Also, the former Kessben FC star played an integral role in the Black Satellites history making when they became the first African country to clinch the World Cup at U-20 level in 2009 in Egypt, where they defeated Brazil via penalty shootouts in the final.

With the senior national team, the Black Stars, he made only two appearances.

Also in Europe, he featured for clubs like FC Twente, Granada, FK Palanga among others.