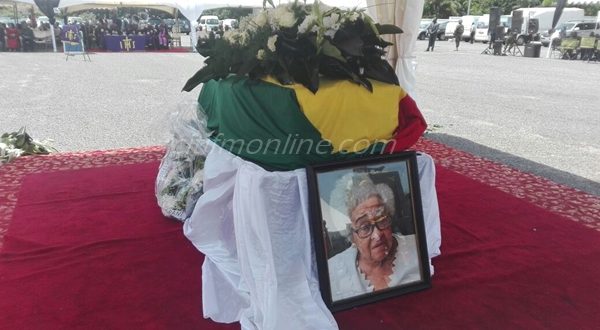 A state funeral has been held for former Council of State member, Dr, Mary Grant at the forecourt of the State House in Accra. She left behind two of her own children, and four adopted  ones. Dr. Mrs. Mary Grant was awarded at the Ghana Women Awards, the premier awards ceremony aimed at celebrating the success of women of excellence in various facets of the society. She is a sister to the late Paa Grant, a merchant and politician in the Gold Coast, who has been called “the father of Gold Coast politics”.

Dr. Grant, an old student of Wesley Girls, is the first Wesley Girls High School Alumni to be a medical doctor.

She has led Ghana’s delegation to several international conferences such as the World Health Organisation (WHO) General Assemblies in Geneva, World Bank Meeting in Africa Health,WHO Regional Conferences in Africa, Cairo Conference on Population and Development among others.

She was among Ghana’s delegation to the Beijing Conference on Women’s Rights. At the 39th Annual General Conference in 1997, the Ghana Medical Association awarded her a Certificate of Honour for her concern for welfare of doctors.

As a medical practitioner, she had been critical of health workers who embark on strikes at the expense of human lives.