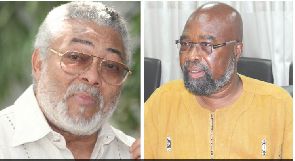 In his view, “His integrity, which has made him a global icon par excellence, transcends the boundaries of any political party or country.’’

Dr Djokoto was reacting to the press conference recently held by Dr Henry Lartey accusing the former President of corruption for accepting $2 million from a former Head of State of Nigeria, General Sani Abacha.

The NDC Constituency Chairman, in a press statement, said he had read with utter dismay and disgust the comments attributed to the GCPP flag bearer, Dr Henry Lartey.

In a statement, he stressed that the unfounded and unsavory comments about the founder of the NDC, Flt Lt J.J Rawlings, and his family deserved no response.

However, he said it was clear that Dr Lartey did not measure up to a tenth of his own father’s integrity and no wonder the fortunes of the GCPP continued to dwindle under his watch, from 1.04 per cent of popular votes attained in the 2000 presidential election to 0.35 per cent in 2012.

According to Dr Djokoto, Dr Lartey “in a sorry attempt to appear on the political radar had allowed himself to be manipulated to put out a complete misrepresentation of events relating to the $2 million brought into the country by the “devious Guazo” from Nigeria.

“The overwhelming majority of Ghanaians that I come across daily have an unshaken belief in the former president and the ideals he stands for,” he stated.

The statement explained that “out of his own volition, the former president exhaustively dealt with the $2 million saga in two interviews granted to the Guardian Newspaper in Nigeria and the Daily Graphic without a scathe on his reputation”.

According to Dr Djokoto, knowing who the former president is, he was very confident that the integrity of his word would be proven at any forum today, tomorrow or forever.

“It is, however, surprising that these effusions from Dr Henry Lartey, which gained very little media attention, rather found its way into some media outlets apparently sympathetic to the NDC

“This is a clear indication that there could be a few rogue elements within and without the NDC who seek to lower the bar of probity and accountability for their own parochial interests,’’ he stated.

He stressed that the masses would remain focused as Ghanaians and party members, and would, therefore, not be distracted by desperate political actors who were looking for straws to clutch on to.