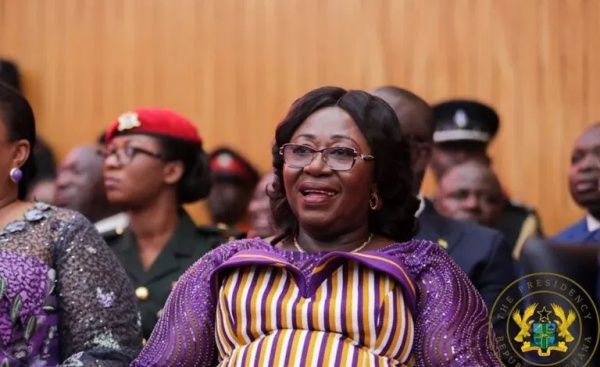 I read misleading and mischievous propaganda on some online portals targeting the Chief of Staff Frema Opare sponsored by NDC Member of Parliament for South Dayi Constituency, Hon. Rockson Dafeamekpor.

According to Hon. Rockson Dafeamekpor, "he has information that the Chief of Staff has written to several state institutions calling on them to make available cars and other state properties to be auctioned.

How does this bogus allegation by NDC MP Rockson-Nelson Dafeamekpor against the Chief Staff Frema Opare amount to the Chief of Staff being fingered in auctioning of several state properties?

Respectfully, some journalists need to exhibit the highest standards of professionalism and avoid sensational headlines.

However, I would like to ask these simple questions:

2. What efforts has Hon. Rockson Dafeamekpor put in to assist the State to deal with the 250 vehicles belonging to the State which were auctioned by John Mahama's Government between December 23, 2016, and January 7, 2017, in the period of the transition when the NDC had been heavily defeated by the New Patriotic Party?

3. What efforts has Hon. Rockson Dafeamekpor put in to assist the State to investigate NDC officials who invited some STC Staff to the then Flagstaff House to give auction exercise a semblance of proper valuation while some appointees of John Mahama put their own values on the State Vehicles and subsequently auctioned to themselves?

3. Can Hon. Rockson Dafeamekpor help the State to investigate and prosecute the Mahama's appointees who auctioned State Vehicles which were barely two years old in clear breach of the law?

It is important to state that Ghana is blessed to have a selfless and incorruptible female Chief of Staff in the person of Hon. Frema Opare, and the majority of Ghanaians have absolute confidence in her that she can never bring herself so low to the extent of involving herself in auctioning of several state properties without any legal justification.

Hon. Rockson Dafeamekpor failed to even establish that the supposed approval of auction of Kumasi Technical University's vehicles was for the personal benefit of the Chief of Staff.

Hon. Frema Opare is clean, innocent and harmless as doves and no amount of propaganda by some elements within and without the NDC can bring her down.

The Chief of Staff Frema Opare is absolutely not fingered in auctioning of several State properties as reported by some online news portals.

Therefore, I would like to urge the general public to completely disregard such malicious publication against the Chief of Staff, Hon. Frema Opare.

What is wrong with approving the auctioning of UNSERVICEABLE VEHICLES by the Chief of Staff?

There is absolutely nothing wrong here because that is what sensible and proactive people do when the assets cannot be repaired at a reasonable cost.