Reasons to get excited about the return of the Ghana Premier League.

After the infamous #no.12 fallow two season of competitive football activities in Ghana, it's time to get excited again for the return of the  Ghana Premier League (GPL/GhPL).

The GPL is back with a bang, and there are a whole host of brilliant top fixtures to whet your appetite tomorrow, across all approved venues by the Club Licensing board.

Nine venues will host all the League matches simultaneously on Sunday, 29 December, 2019 at 3:00pm local time.

From the Nation's Wembley clash between the wounded Phobians and well prepared Bibires, The Porcupine Warriors hosting Sure Wonders at Baba Yara, The Still believers ready for newly-promoted In Sha Allah boys owned by the Doyen of Ghana Football Alhaji Karim Grusah, there's so much to look forward to... and we haven't even mentioned  Miners vs Oly Dade yet.

Ghanaguardian.com has listed reasons for you to cancel your weekend plans and fill the various venues across the country to return the Love of the indigenous competition

It's all eyes on Kim Grant at Accra Sports Stadium this weekend, as he will be hoping to prove all doubters wrong in the opener of the GPL to keep his job safe.
Grant was nearly sacked over his license A certificate issues after he lost to Kotoko in the President Cup. But well prepared Berekum Chelsea are desperate to keep their good records against Hearts with high hopes of beginning the new season on a good note.

Medeama head south to Cape Coast stadium in a cracker against Ebusua Dwarfs, anyone could cause an upset but the Abontoabontoa boys holding home advantage.

Kototo host XI Wonders at Baba Yara Stadium, Sure Wonders aren't a bogey side as such to Fabulous, but certainly the intention will be to suprise Maxwell Konadu and his lads at their own backyard with the youngest coach in the league Ignatius Osei-Fosu in-charge as head coach. But the innovative minded coah is likely to watch and direct the game from the stands in their first two games. who knows what'll happen at Baba Yara Stadium tomorrow ?

Dreams FC and King Faisal face off at the Theatre of Dreams, Dewu park.For both sides, it represents a brilliant opportunity to sort themselves out in the GPL opener.
The game is at Dewu Park, making the Belivers the favourties, but both will be absolutely desperate to begin new season with 3 points.

Karela have a another opportunity to further consolidate their sympathizers close after brilliant show in the NC competition when they face "Academy boys" boys WAFA in Tarkwa at AKOON community Park.

Plenty are keen to see how the new Wa All Stars fare in the opener of the GPL, after change of ownership and was moved from the North to Accra as they travel to face the Liberty Professionals in a regional derby at the Dansoman park.

Aduana Stars kick off the GPL opener against  Inter Allies at the Nana Agyemang Badu stadium in Dormaa. It's a really exciting way to start the Ghana Premier League as the owner of Ogya boys, Oseadeeyo Agyemang Badu II celebrate 20th anniversary of his enstoolment as Dormaahene.
Perhaps the fixtures had been relatively kind to them as a win will bring joy in Dormaa.

The Hunters will be waiting at the Nana Gyeabour Park in Bechem to hunt the Sharks who are moving from the ocean to the game in search of 3 points.

Why not end with the Wonder Club who have promised to conquer all first five GPL games ?  Len Clay Stadium brings us the pick of the weekend, , in the form of Ashanti Gold vs Accra Great Olympics.
Oly Dade, the famous team in Ghana after receiving promotion from congress to the top flight have promised wonders this season as Obuasi is set to be a thriller.

In truth the Miners are huge favourites, especially at home with their great and fantastic form. Connoisseurs tip them as  favourite to win the 2019/20 league season.

Oly will be relaying on experienced players like Bernard Don Bortey, Emmanuel Clottey and co to get at least a point to return to the Capital. 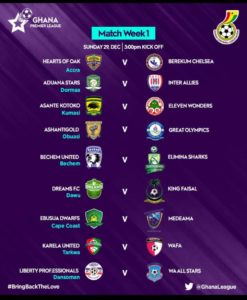 Quite simply, the GPL will be more exciting this season. Come on, let's all focus to make the GhPL more attractive to attract cooperate world to come sponsor the product. Sometimes it's great watching other leagues, but there's nothing like a good round of Ghana Premier League football if we all come together to raise it's standard again.

#BringBackTheLove Igniting passion and creating wealth for all consumers of the product to enjoy.