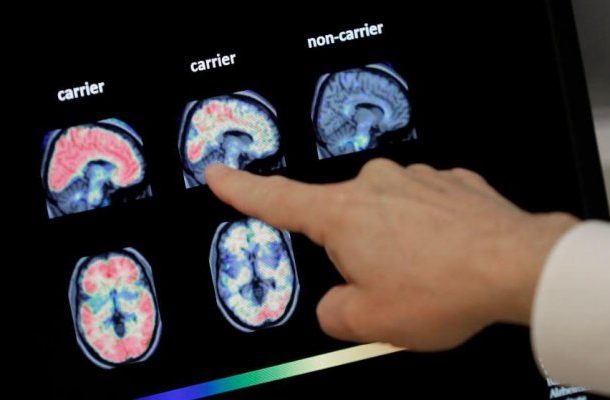 Scientists are beginning to understand why Alzheimer's disease affects more women than men, and why the disease seems to progress more quickly in women's brains.The explanation appears to involve social, biological, and genetic differences, researchers reported Tuesday at the Alzheimer's Association International Conference in Los Angeles.One study looked at sex differences involving a toxic protein called tau, which tends to spread like an infection through the brains of people with Alzheimer's."We think it goes from neuron to neuron and goes from one part of the brain to the next part," says Sepideh Shokouhi a research assistant professor of psychiatry at Vanderbilt University Medical Center.Researchers used special brain scans to compare tau in the brains of more than 400 men and women.

Some had mild cognitive impairment, a memory problem that often precedes Alzheimer's.And in this group, a person's sex affected where tau appeared in the brain."We saw a more spread-out pattern in women with mild cognitive impairment than men with mild cognitive impairment," Shokouhi says.That suggests that in women, tau is able to move more easily from one brain area to another."We think [being female] affects how tau spreads in the brain," Shokouhi says. "We think it accelerates it."Another study looked at how work and family experience affected women's risk of memory problems in later life.The study of more than 6,000 women born between 1935 and 1956 found that working outside the home is good for the brain."After age 60, women who had previously participated in the paid labor force experienced slower memory decline than women who had not engaged in the paid labor force," says Elizabeth Rose Mayeda, an assistant professor of epidemiology at the University of California, Los Angeles Fielding School of Public Health.The benefit of working held whether or not women were married or had children. It also held for women who left the workforce temporarily for family reasons.The study didn't try to show why working made a difference. But the possibilities include "cognitive stimulation, social benefits of working, as well as financial benefits," Mayeda says.Financial independence may be important, she says, because poverty is a risk factor for mental decline in later life.Until a few years ago, many researchers thought more women were living with Alzheimer's because they live longer than men, says Heather Snyder, senior director of medical and scientific operations at the Alzheimer's Association.Now that idea is less popular, she says."As we started to look at the science and what the science was showing," she says, "it did start to suggest that there were differences in the brains of women and men that may contribute to why more women are living this disease than men."And these days, lots of Alzheimer's researchers are studying sex differences, she says."There's different biology that contributes to an individual's risk," she says. "[There are] changes in hormonal systems throughout life. Women and men have different immune systems, and that's no different in our brain."At the conference, one team reported that women's brains maintain a higher metabolism than men's as Alzheimer's develops. Another team found that the risk of Alzheimer's is influenced by different genes in men and women.It's remarkable that scientists are only now beginning to understand sex differences in Alzheimer's, says Dallas Anderson, a neuroepidemiologist at the National Institute on Aging."Sex is such a basic variable, you'd think that we really would have nailed things down by now," he says. "But no."The National Institutes of Health is working to change that by funding more research into sex differences in the brain, Anderson saysSource: npr.org