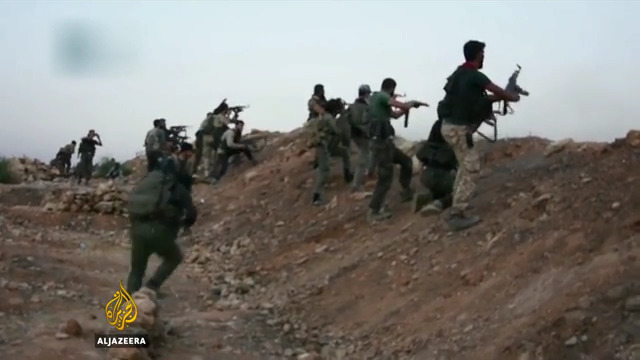 Shells fired by Syrian rebel groups have killed at least 28 civilians in southwestern districts of the battleground city of Aleppo over the last 24 hours, a monitor said.

He said dozens of people were also wounded.

The city's southern edges have been ravaged by intense fighting in recent days as rebels seek to ease a government siege and cut off the government's own access route into the rest of the northern province.

A rebel alliance that includes the Jabhat Fatah al-Sham group - which was formerly the al-Qaeda-linked Nusra Front - and the Ahrar al-Sham group said it had taken army positions in the southwestern government-held parts of the city within the first few hours of launching a battle to break the siege imposed on rebel-held areas.

Al Jazeera's Milad Fadel, who is embedded with Syrian rebels on the edge of western Aleppo, said government forces have been preparing for an extended assault.

"Regime forces have several lines of defence protecting Aleppo's western neighbourhoods. This battle could last several days, or maybe even weeks," he said.

"For the opposition, on the other hand... this is really their last stand," he told Al Jazeera. "If they lose Aleppo, which they've held a major portion of now for about four odd years, they might as well have lost all the battle for Syria.


"The regime, backed by Iran and Russia, is seen to have the upper hand... the rebels are in a bad situation. If they manage to break that siege [on Aleppo], their situation at the negotiating table will improve but ever so slightly."

It said nine people - among them three children - were killed on Monday and 11 people died in the attacks on Sunday.

Once Syria's economic powerhouse, Aleppo city has been roughly divided between government control in the west and rebel control in the east since mid-2012.

In recent weeks, government forces have encircled the east, raising fears of a humanitarian crisis for the estimated 250,000 people now under siege there.

Last week, Moscow announced the opening of "humanitarian corridors" from the east into government territory for civilians and surrendering rebels.

More than 280,000 people have been killed since Syria's conflict erupted in March 2011 with anti-government protests that morphed into a brutal civil war.