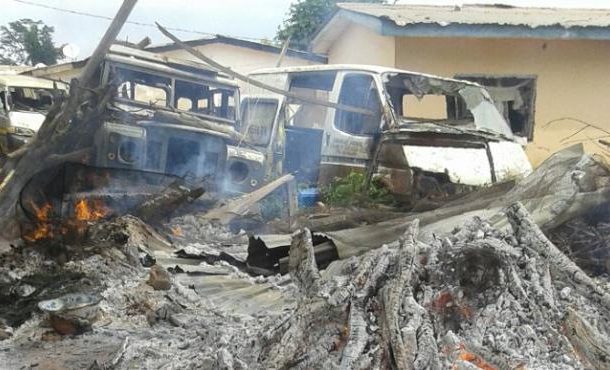 The Police administration has threatened to abandon their duties at Donkorkrom and Tease in the Eastern Region until a police station that was destroyed by residents of the area is rebuilt.

This comes after an angry group of over 500 residents of Donkorkrom and Tease attacked and set ablaze some police facilities in those areas in protest of the escape of some police officers who were arrested for attempting to rob a GCB bullion van at Afram Plains in the Eastern Region.

The police administration has insisted that they would not assign any police officer to the area until the police station is rebuilt.

The attempted robbery led to the death of the driver of the van after a heated exchange of gunfire between the police officer in the van and the suspects.

Speaking to the media on Friday, Director of the Criminal Investigations Department (CID), COP Prosper Kwame Agblor insisted that the police came out to assure the people that they would rearrest the escapees and could therefore not fathom why they launched the needless attack.

"However, the action that followed the escape of the suspects is unfortunate and reprehensible, to say the least. On Thursday, residents of Donkorkrom and Tease on the instigation of some opinion leaders mobilized and attacked some Police stations vandalizing service vehicles and other vehicles packed within the premises of the said police facilities and setting some rooms of the Donkorkrom Police barracks ablaze.” He stated.

He however gave the assurance that, the police officers suspected to have tried to rob the bullion van including those who did the arrest will be thoroughly investigated and sanctioned appropriately if found guilty.