Recruitment into the Ghanaian Security Agencies; A Patriotism To Serve Country or Desire for Jobs? 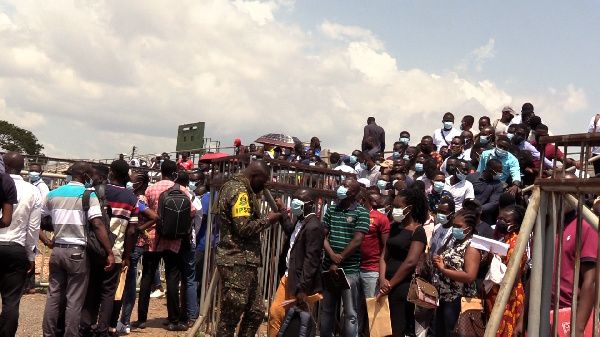 Recruitment processes into the security agencies in Ghana over the last few weeks have become an issue of concern as hundreds of desirous youth line-up in long queues under the vagaries of the weather to go through the shortlisting processes.

With youth unemployment on the increase, getting enrolled into the security services has become an option for many of our youth who hitherto may have turned down an opportunity to serve in any of these services for free.

However, times they say have changed and so has the services changed for the better- including its image and public outlook in the eyes of many Ghanaians.

Today the services attract hundreds of youth- both male and female prospecting for employment despite offering limited openings for potential employees.

The security agencies in Ghana command a high level of respect across the globe and this is as a result of the high levels of professionalism exhibited by officers and men of these agencies during international assignments.

The respect commanded by the country’s security services among their peers is not something obtained on a silver platter but through years of dedicated service and utmost professionalism acquired from hard work and training.

The positive image carved out for the security services, especially the Ghana Armed Forces, the Police Services and the Ghana Immigration Services makes it imperative that, they are able to attract not just many more youth into their fold, but indeed attract some of the most qualified professionals and graduates to serve their motherland.

It is estimated that not less than thirty thousand youth- ranging from Senior High School leavers to university graduates apply annually to be enrolled as security personnel in the country, despite the services have fewer spaces for prospective applicants.

The large numbers of prospective applicants on yearly basis, imply that, the services would have to employ very strigent and tactical measures to indeed ensure that, not just the best out of the lot get to be enrolled, but also the numbers are cut down to the barest minimum.

Unlike other jurisdictions- the United States of America (USA) and the United Kingdom (UK) included where the security services most often write to prospective applicants bating them to join in their fold, the situation is different here in Ghana.

The large numbers of youth applying for the limited spaces as stated earlier implies that strategies are adopted to get only the best to enter the services to serve.

However, these measures most often have come under scrutiny raising issues of transparency.

The processes of advertising the limited space, the application requirements and the selection procedures that characterise the entire recruitment exercise have often raised eyebrows among a vast majority of the populace.

While the entire processes of recruitment have become a subject of concern, the use of height and general physical appearance as a prerequisite for enrollment into the services have come under intense criticism.

Despite the fact that, these requirements have been there for decades, there are some who have questioned how they situate within the context of artificial intelligence and technology?

To them, assuming an applicant falls below the height requirement but possesses IT knowledge and modern skills that makes him indispensable to be utilised by any of these agencies to fight crime or to ensure defence, would he or she be rejected for not meeting the height requirement when such a person may not even be deployed into front line battle where he or she would be required to operate physically?

Beyond the physical requirements, the mode of opening the listing to the public have also come up for questioning.

It is believed that information on the openings to the public most often than not have been inadequate.

It is instructive to note that in some particular years, the services even though failed to call for applications, recruitments have done without recourse to openingly announcing it to the public, further raising issues of transparency.

Even though a call to serve in the security services is viewed as a patriotic duty, interested Ghanaians are made to purchase recruitment forms at exorbitant fees of between 150 and 200ghana cedis. Despite the concerns raised about this, the agencies have explained that the relevance of selling the forms is to raise money to augment the administrative processes of the recruitment exercises.

The security agencies are noted to be disciplined regimented organisations and that certain behaviour and attitude are not tolerated since it has the potential to undermine the conduct of such agencies.

For this reason prospective applicants and recruits are advised, to be cautious about the implications of how they tinker with their body parts.

But the real issue is whether or not applicants seeking to enter into the services do so with a genuine patriotic passion to serve and defend their country or are frustrated by unemployment situation in the country?

Patriotism and the desire to serve must be the cardinal considerations for enlistment into any of the country’s security services and all conditions that makes economic consideration as the main attracting point for the youth must not be encouraged.

Short of assuming security competence to question how or direct how prospective applicants should be recruited into these services, I believe that something must be done to improve on ways of recruiting our youth into the service and this must respond to amodern technological trends.