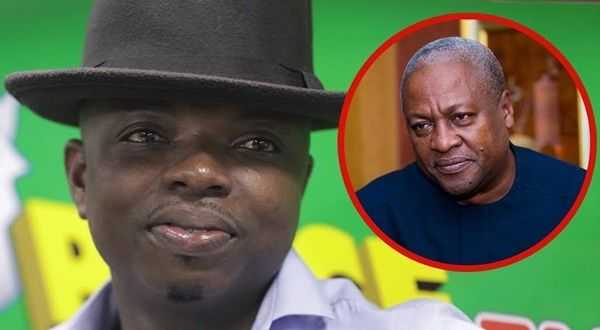 Bono Regional Chairman of the ruling New Patriotic Party (NPP), Kwame Baffoe 'Abronye', has challenged former President John Mahama to as a matter of urgency refund all monies received from the State since 2019 to date if he truly feels Ghanaians are in difficult times and suffering hardships.

"I am therefore challenging the former President to as a matter of urgency refund all monies received from the State since 2019 to date if he truly feels Ghanaians are in difficult times and suffering hardships," he said.

Kwame Baffoe was responding to a statement released by the Office of the former President countering his (Kwame Baffoe) earlier statement that he (Mahama) " . . took home the fattest ex-gratia of GHc 14m in 2013..."

According to Ex-President Mahama, such "unintelligent rants" of the said Kwame Baffoe who had gained notoriety for fabricating and propagating falsehood on behalf of Nana Akufo-Addo against John Mahama is a failed decoy to suppress the national discussions about the hardship Ghanaians are going through because of the clueless, inept, hopeless incompetence and poor governance of the Akufo-Addo and Bawumia administration.

A statement signed by Joyce Bawa Mogtari, Special aide to John Mahama, was emphatic that the former President never took any such ex-gratia payment of GHc 14m in 2013 or at any other time during his 25 years of distinguished public service.

"Fortunately, ex-gratia payments are a matter of public record and are available in the office of the Chief of Staff or the Controller and Accountant General's Department."

"We challenge the office of the Chief of Staff and the Presidency to provide proof of the payment of any such amount and stop using idle miscreants among its ranks to spread falsehood," portions of the statement read.

The statement further said it will be surprising if any such payment had been made to the former President and has not been reflected in any of the numerous Auditor General's reports presented to Parliament since 2013.

In response to the former President, Kwame Baffoe said Mr. Mahama must understand that, no ex-gratia of any former President has been captured in any of the Auditor General's report since 1992.

"Mr. Mahama should bow down his head in deep shame as he still receives huge monies from government as salaries and benefits even in a time of a pandemic where the President and all his appointees have cut their salaries by 30%," he said.