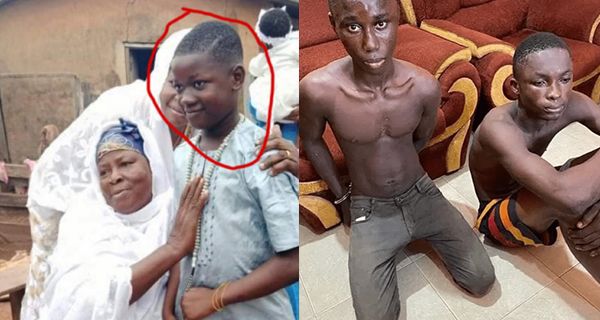 Family members of the two teenage boys standing trial for the alleged ritual murder of eleven year old Ishmael Abdallah Mensah in Kasoa have reportedly relocated from the area.

The nation was hit with the callous incident not long ago as two boys Felix Nyarko and Nicholas Kiki aged 16 and 17 respectively killed a neighbour and a friend of the first accused for ritual purposes.

After committing the crime, the pair buried the lifeless body of the young boy in a shallow grave in an uncompleted building before they were accosted.

Family members of the two boys out of fear of  being attacked have vacated the area and relocated as they fear for their lives.

“I have not met them yet. The police tell me they have all moved from the area as this matter got to court for fear of their lives.”

“I have tried to reach them [but] it’s not been successful yet but I’ll be working with the police so even if we can agree to meet at the police station or at a safe location, we can do so and then I can take up the bail application and other matters from there."

The ages of the two accused persons had been an issue for contention as it will essentially determine the extent of punishment meted out if they are indeed found guilty for the crime.

Police prosecution were finding it difficult in ascertaining the ages of the two accused persons but the prosecutor on Tuesday May 4, told the Ofaakor District Court that they have been able to ascertain the age of one of the juvenile offenders.

Prosecutor, Chief Inspector Ernest Agbo told the court that they have been able to know the age of one of the accused persons, Felix Nyarko who is a juvenile as records at his former school shows he was born on 1st September,2005 making him 15 years.

The Police says they were unable to get any records at the said hospital the accused claims was born but they are satisfied with his school records that he will turn 16 years in September.

He prosecution further prayed the court to allow them more time to conclude the duplicate docket and forward it to the Attorney General's Office for advise.

The case has been adjourned to May 16th 2021 while the accused persons are still in remand.