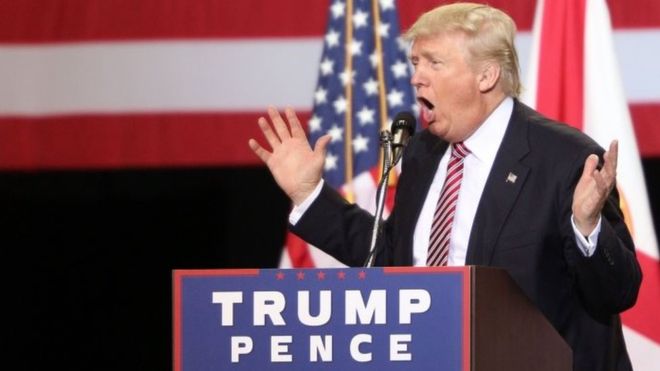 More than 70 Republicans have signed a letter to the party's National Committee head urging him to stop helping Donald Trump's campaign.
They said Mr Trump's "divisiveness" and "incompetence" risked drowning the party in November's election.

The letter said that the party should instead focus on protecting vulnerable candidates in elections to the Senate and the House of Representatives.

Former members of Congress are among the signatories of the letter.


"We believe that Donald Trump's divisiveness, recklessness, incompetence, and record-breaking unpopularity risk turning this election into a Democratic landslide," said a draft of the letter obtained by Politico.

"Only the immediate shift of all available RNC (Republican National Convention) resources to vulnerable Senate and House races will prevent the GOP (Republican Party) from drowning with a Trump-emblazoned anchor around its neck."

The letter added: "This should not be a difficult decision, as Donald Trump's chances of being elected president are evaporating by the day."

Reacting to the move, Mr Trump said he was not concerned that the party could cut him off.

"All I have to do is stop funding the Republican Party," the billionaire said.

Time Magazine on Thursday reported that RNC Chairman Reince Priebus had threatened to withdraw funding from the Trump campaign, and instead direct it to Congressional campaigns.

Mr Trump denies that this conversation ever took place.

The Republican presidential nominee has endured 10 days of negative headlines after a string of controversial comments.

Polls suggest support for the embattled candidate has been falling in key battleground states in recent weeks.