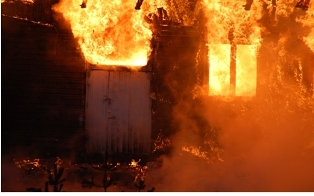 Irate residents of Donkorkrom in the Afram Plains North district of the Eastern region have set the police station there on fire over clashes with the law enforcement body.

The locals clashed with police personnel Thursday as they demonstrate over the escape of two police officers and one other in an operation to rob a GCB Bank bullion van at Maame Krobo.

Five people are reported injured in the melee and have since been rushed to the Donkorkrom Presbyterian Hospital for treatment.

The suspects escaped while they were being transported to Nkawkaw from the scene of the incident.

Meanwhile, reports reaching Starr News have it that one of the three escapees Lance Corporal Kusi Abrokwah has been re-arrested at Nkawkaw.

In a related development, the Police in Tease in the Afram Plains South district have evacuated the area following threats on their lives from furious residents over the same issue.

The irate residents have also threatened to set the police station ablaze if the suspects are not rearrested immediately. They are also demanding that government transfers all the officers at the station.

Background The suspects were arrested Tuesday evening after the attack on the bullion van led to the death of the vehicle driver while a Police officer escorting the vehicle was also wounded.

The armed robbers attacked the GCB Bank bullion van at Maame Krobo in the Affram Plains South district of the Eastern region, killing the driver of the van.

The heinous incident reportedly occurred on Monday morning at about 10:30am. The robbers fled into the bush after the attack, Afram Plains district commander Superintendent Obeng Dompreh told Starrfmonline.com.

He said the robbers could not succeed with their operation as a result of a gun battle with the police officer on board the vehicle.

After thorough investigations, two Police officers known as Kissi and Fire and a mechanic were arrested for their involvement in the robbery incident.