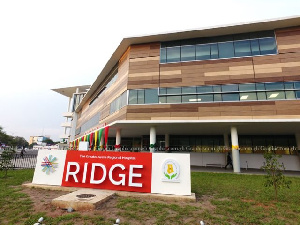 The Greater Accra Regional Hospital is said to have finally released a detailed medical report of events leading to the death on Thursday, June 25, 2020, of the wife of Dr. Emmanuel Kuto, Director of the Institute of Languages at the hospital.

Dr Kuto after the death of his wife took to his Facebook account and accused staff of Ridge Hospital of medical negligence including the administration of wrong prescriptions which may have caused the death of his wife Madam Esther Sosuh, who had undergone a hernia surgery earlier on June 23.

According to the details of the hospital's report as reported by graphic.com.gh, the deceased after her surgery suffered complications after she fell in a washroom at the facility on June 23, 2020.

The report which is said to have been signed by Dr Nyabenda-Gomwa Gomda says the patient was administered “SC clexane 80mg and put on TED stockings” as well as intranasal oxygen, when an assessment by doctors and nurses at the Medical Ward found an impression of her pulmonary embolism.

"On Wednesday morning, 24th June 2020, the patient was seen in bed complaining of severe central chest pain, sweating and restless. The Patient was again examined and a diagnosis of Myocardial infarction was made. A chest Xray, Electrocardiography, D-Dimer, Troponins and 2 were done and Physician Specialists were requested to review her. Anticoagulation was continued.

The report states further that the patient suddenly suffered severe difficulty in breathing and became restless at 11:45 pm on June 24, 2020, and died minutes later on the same day.

"The night doctors were called to see the patient who they assessed and commenced resuscitation immediately but were unsuccessful and the patient died at 12:10 am on Thursday, 25th June 2020," the report states in conclusion.