Rio 2016: Brazil's first gold from the City of God favela 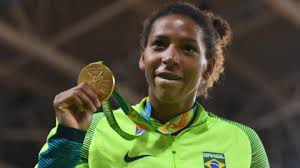 "The place for a monkey is in a cage. You are not an Olympian." That was one of the text messages gold medallist Rafaela Silva received four years ago after being disqualified in the early stages of the London 2012 Olympics for an irregular manoeuvre.
Then, she considered giving up judo saying: "The messages said I was an embarrassment to my family, so they really hurt."

But four years later Silva came back to bring Brazil its first gold medal of the Rio games in the 57kg judo division.
Silva's victory on Monday was hard-fought. She faced inequality, poverty and racism growing up in one of Rio's toughest neighbourhoods.

Her family enrolled her in free judo classes when she was a child to keep her away from gang life and drugs. In an interview with the New York Times, Silva's coach, Geraldo Bernardes, said that he saw potential early on.

"Judo requires from the athlete a lot of sacrifice. But in a poor community, they are used to sacrifice. They see a lot of violence; they may not have food.

"I could see when she was very young that she was aggressive. And because of where she is from, she wanted something better."


Silva's story exposes the deep racial tension in Brazil as well as the difficulties of life in the favelas.

According to Alexander Wolff, from Sports Illustrated, Rafaela "spent the first eight years of her life in the City of God, getting into fights with boys and getting expelled from school."

The notorious Cidade de Deus, or City of God, is Rio's famously violent favela. It acquired its notoriety after a 2002 film which chronicled its decline into drug battles, criminal rivalries and excessive violence between the 1960s and 1980s.

Wolff, who profiled Rafaela, wrote: "The movie's tagline - 'If you run, the beast catches you; if you stay, the beast eats you' - captures the fatalism of life in the cramped shantytowns where one of every five Cariocas (native of Rio de Janeiro) lives, often trying to avoid crossfire between drug gangs and police."

Little seems to have changed.

RioOnWatch, a community reporting project started by the American NGO Catalytic Communities, has worked with journalists to expose the realities of life in the favelas during the Olympics.

Speaking to RioOnWatch, 20-year-old Mauro Leocadio, said: "The other day I was leaving the house and going to my course when I saw a squad of Shock Troop vehicles. This doesn't happen in affluent areas. I wonder why it is necessary to have so many armed men like that. I felt vulnerable,"

"The UPP (Pacifying Police Unit) is not a project of peace, it is far from that. Their presence has not ended the violence."


For many, the Olympics haven't helped to ease feelings of inequality either.

Juliana Barbassa, a native Brazilian and international journalist, told the BBC World Service: "The city that we got as a result [of Olympic development] is a less equal city; a city in which much of the investment was diverted to the wealthier areas, and a city that doesn't serve the majority of its populations like it could have."

Marta Arretche, a political scientist who studies inequality at the University of Sao Paulo, told the Associated Press. "Behind the apparent peaceful melting pot there's a lot of tension and not much open talk about race."

Yet from her perspective the inequality is clear. "The bias against being black shows up almost everywhere," Ms Arretche said.

Rafaela and her older sister Raquel are both judo champions who trained under Bernardes but Raquel did not qualify for the Olympics.

Through tough times the girls have stuck with judo and their coach.

Raquel told the New York Times it was hard for her sister to start up again as a result of the racism she experienced after the London Games.

"Rafaela got depressed. She watched television all day and cried alone in front of the TV. Our mother cooked her favourite things to cheer her up, but that didn't work."

In the end Bernardes encouraged her to start training again and Rafaela's tenacity prevailed.

On Monday after beating Sumiya Dorjsuren of Mongolia, she ran, filled with emotion, to hug her family and coach - a win she celebrated just a few miles from the favela.

The girl once ostracised for her race is now being celebrated across Brazil. "They said I was a disgrace," said Rafaela. "Here I am: an Olympic champion in my hometown."