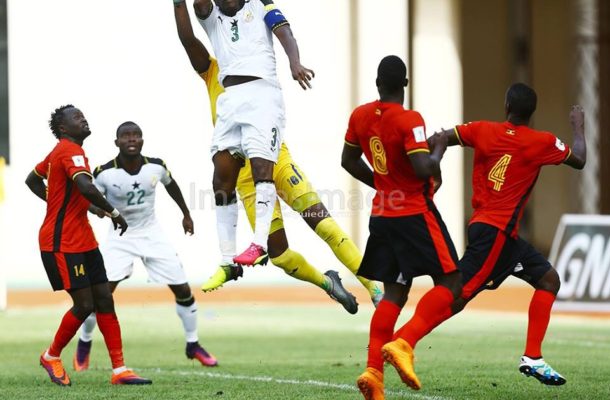 Gyan battles for the ball

Uganda held Ghana to a 0 - 0 draw in the 2018 FIFA World Cup qualifier at Tamale sports Stadium in Tamale on Friday.

Uganda dominated the majority of the proceedings in the first half but failed to make their chances pay off.

The Black Stars immediately set about controlling the ball as Uganda sat back, and their first chance came through Jordan Ayew, After a lovely cross from right-back Harrison Afful the playmaker unleashed a shot on goal, but It went wide of the Cranes post.

Christian Atsu who won the best player of the last AFCON missed two chances in quick succession, shooting wide from six yards before directing a shot off target.

Meanwhile, the Cranes were also more involved in possession than the Black Stars in the first half ,per Ghanaguardian commentator Sadat Apusi:

The Cranes continued to cause the Black Stars problems and won countless corners, but the two sides went in goalless at half-time.

Ghana deservedly went ahead in possession after the restart, though,

The Black Stars attacked with renewed vigour and had the chance to take the lead ,but he was flagged for offside as he bundled it home.

Jordan Ayew won a free-kick from 20 yards but Gyan's curled effort went straight into the save arms of Onyango.

Ghana were forced to make a first substitution when Afriyie Acquah came off after picking an injury and was replaced by Emmanuel Agyemang.

Khalid Aucho picked up a yellow card after a poor challenge on Atsu but Wakaso shot wide.

The Black Stars won a lot of set pieces close to Uganda's area but were far from clinical and wasted.

Skipper Gyan came close with a header on the 90th minute mark but headed narrowly the post.
The result left the two teams all square on one point in Group E.

Both will be desperate to top the group and ensure automatic qualification to Russia 2018.