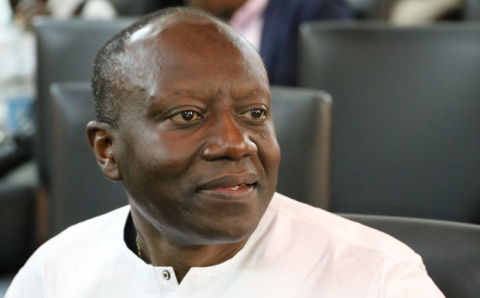 Finance Minister, Ken Ofori Atta,  has spoken of the need for Ghana to strengthen the capacity of its indigenous banks in order to drive the country towards economic development.

According to him, a concerted effort is needed to improve the country’s financial sector to enable it support the developmental agenda of the government.

“For Ghana to take greater control of her economic destiny, we must be clear on the need to have a robust financial sector capable of financing the transformation,” Ken Ofori Atta said on Wednesday.


“For the last two years alone, Ghana raised syndicated loans totaling 3.2 billion on the cocoa side.  This transaction is no doubt one of the easiest and most lucrative credit facilities for the banks involved, but the syndication is done and led by non-indigenous financial houses. Not a single indigenous bank was involved in the last 1.3 billion dollar race.”

The country’s banking sector has come under the spotlight in recent months following the collapse of Capital Bank and UT Bank earlier this year.

There are also reports that a number of the other 35 banks in the country face a similar fate unless certain interventions are made to assist them.

The Finance Minister, who addressed the 3rd Aliu Mahama Memorial Lecture at the National Theatre on Thursday, believes that the proliferation of small banks in the country, was not beneficial to the country’s growth agenda as they are constantly muscled out by the bigger multinational financial institutions that operate in the country.

He suggested that in order for local banks to make a significant impact on the market and compete more effectively both locally and globally, these institutions might have to “consolidate their forces. ”

“I think it is time we took deliberate steps to build the capacity of our local banks to become major participants in this assured multi-billion dollar money market right here in Ghana, he said.

“But if that is to happen, our banking sector needs to grow up both literally and metaphorically. In my view, the current situation where we have an oversupply of small Ghanaian banks, is not sustainable or useful to the agenda. In banking, bigger is better.  We want to see our banks talking to each other consolidating their forces to take a bigger stake in the domestic market and gather the muscle to venture beyond our borders.”