Sad story of how a homeless HIV patient was neglected by pastor, health centre 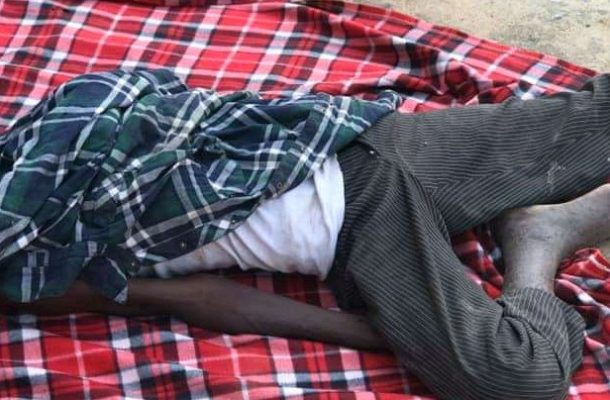 Do you remember the parable of the Good Samaritan where a Jewish priest neglected a traveler who had been stripped of his clothing, beaten to a pulp and left half dead alongside the road? Well, a similar story seems to have occurred in Accra.

Nana Akwasi Addo, a journalist with Kasoa based Pink FM who shared the story said, he received a distress call that a man was lying unconscious beside a church building which he rushed to the scene to confirm.

He identified the church as Apostolic Church-Ghana, however, he did not immediately disclose the branch due to its security implications.

According to him, his preliminary checks upon reaching the scene revealed that the sick man named Abraham had been lying there for days after worshipping with the church on Wednesday evening.

Nana Akwasi Addo narrated that his immediate plan was to rush Abraham to the hospital but was unsuccessful because the ambulance he called failed him.

He said the next thought was to knock the doors of the pastor to see if they could be some help. He said to his surprise, the man of God turned them away saying he has no help for Abraham, an action that shocked him to the core.

The journalist said he then hired a taxi and in the company of a police officer, took the man to Ngleshie-Amanfro Health Center but disclosed the reception from the nurses there was unbearable.

He shared his frightening experience on Facebook. Read the full narration below:

I normally do not answer calls from strange numbers for the first time, so I declined answering two calls from this number. Then a call from the Tufuhene of Dompim, Nana Koampong followed. He told me he had given out my contact to someone and that I should answer since they had a situation that needs to be dealt with urgently. When I called back, I was told someone was lying unconscious beside a church building. I asked to be given some few minutes to attend to the situation. Just as I was preparing to leave home, Dada Tino, called to report same incident. He requested I go to the scene with him.

Upon reaching there, we saw this man lying unconscious beside the building of the Apostolic Church-Ghana. Preliminary checks revealed that, he was spotted on Wednesday around the vicinity but insisted to join the church for the evening service. He had indicated to them that he has 4 children and a native of Somanya. He insisted on entering the church building to worship with them.

He was however ushered out after service and decided to loiter around. Residents who found him asked whether he could trace his family but all contacts he gave could not reach any relative of his.
At the scene, whilst waiting for the ambulance which never came after calling, we knocked at the door of the pastor. To our surprise, this Pastor told us he has no business in taking care of Abraham even though he as loitering around his church premises.

We took this man to the Ngleshie-Amanfro health center in the company of a police officer in a taxi. These nurses nearly turned us away because we were not his immediate relatives. They even doubted we were going to settle the bills even when we insisted. We wanted to pay through mobile money but hey, that was not acceptable.

We returned to the health facility around 6pm to checkup on the patient. We were told he was discharged and that we should take him home. Really? Meanwhile, laboratory tests revealed he had HIV and some other underlying health conditions. How could we carry someone who can barely walk and communicate clearly home? I visited the police station and was told I should leave him at he health facility, back there, nurses at the facility also directed I take him to the police station. I called police emergency line but had no proper response.

Now my issues:
1. How could the church fail to care for a person found around their premises?
2. How should the ambulance service fail to respond to such matters considering that we are in Covid?
3. If I find someone on the street at the point of death, why should I be the one to bear treatment cost?
4. Can’t we have a government policy directing that at least such persons are catered for freely by the funds generated internally by health facilities?
5. Can’t we build centres to cater for the aged who have no homes?