This is heartbreaking. The sad video showing how a bride and three others died in a helicopter crash on her wedding day has been shared online.

Rosemeire Nascimento da Silva had planned to surprise her groom Udirley Damasceno by arriving at her wedding venue in a helicopter.

Sadly, she did not make it to the venue. She died last December with her brother, her pregnant wedding photographer and the pilot, after the weather became foggy 21 minutes into the flight, thereby making it impossible for the pilot to see. 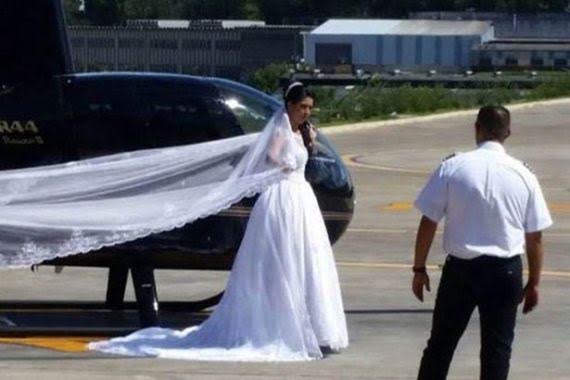 The video was recovered from the scene of the helicopter crash and it shows the fear on the faces of the bride and her brother as it became clear something was wrong.

As the video began, the bride can be seen holding on to her brother while looking out the windows at the fog. She and her brother looked at each other and smiled bravely. The pregnant photographer also gave a cheeky smile. They obviously thought the weather would get better.

When it only got worse, the bride and her brother became visibly agitated and clasped each other's palms. With time, they could no longer keep up the brave demeanour and the bride's face changed like she was about to cry.

In the midst of fog and clouds, the pilot lost control of the aircraft and became disoriented. The piercing cries of the bride and her brother are the last thing heard as the aircraft crashed just a mile from the wedding venue in São Lourenço da Serra, Greater São Paulo, Brazil

Below is a video of the incident...