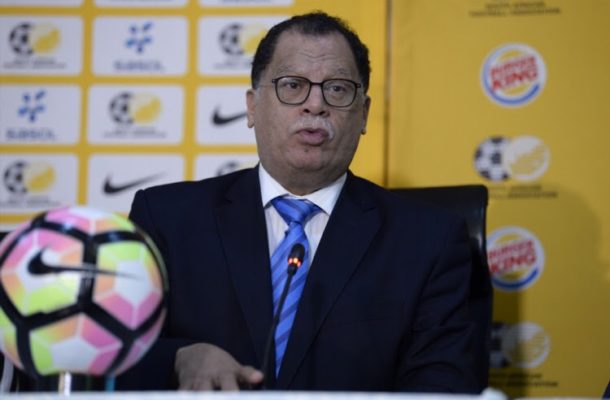 South African Football Association (Safa) president Danny Jordaan’s bid to become a member of the FIFA Council‚ the all-powerful cabinet that runs the world’s game‚ could be determined by a meeting of regional body Cosafa in Johannesburg early next month.

Nyantakyi resigned in the wake of corruption allegations sparked by an undercover investigation in his homeland and his vacant position on the General Council can only be filled by an African candidate from an English-speaking country.

The South African Football Association (Safa) president is one of five candidates for the vacant African Anglophone seat on the 37-member council.

Jordaan’s rivals for the post‚ which will be voted for at a special Confederation of African Football Congress in Egypt on September 30‚ are:

The three candidates from the Cosafa region‚ Chetty‚ Jordaan and Nyamilandu‚ could be whittled down to one after a meeting of the regional body in Johannesburg on September 9.

The member countries are to discuss the possibility of supporting one candidate from the region and asking the other two to step aside to give the preferred candidate a better chance of beating his East African rivals.

Jordaan has twice before declared his candidacy for the FIFA seat but then withdrawn before the vote.

If he is to get Cosafa backing‚ it will help his chances in the CAF election although there is still the fallout from the recent FIFA World Cup vote to contend with.

Jordaan broke ranks with the CAF leadership and the majority of the continent when South Africa voted for the North American bid of Canada‚ Mexico and the USA over Morocco to host the World Cup in 2026.