National Organiser of the governing New Patriotic Party (NPP), Sammi Awuku, is hopeful that continued agitation against the conversion of the University and Unity Halls into mixed facilities at the Kwame Nkrumah University of Science and Technology (KNUST) will lead to a reversal of the policy.

In a statement on Facebook, he said he was not convinced by the argument that “you can only increase female enrollment by decreasing male enrolment on KNUST campus.”

Mr. Awuku also said his standing as an alum of Commonwealth Hall demands that he sides with the protesting alumni of University and Unity Hall.

“As a vandal, I owe a sacred duty to stand by my brothers from Katanga and Conti. Am convinced this decision will be reversed when the considerable level of agitation is brought to the attention of authorities so sanity can prevail.” 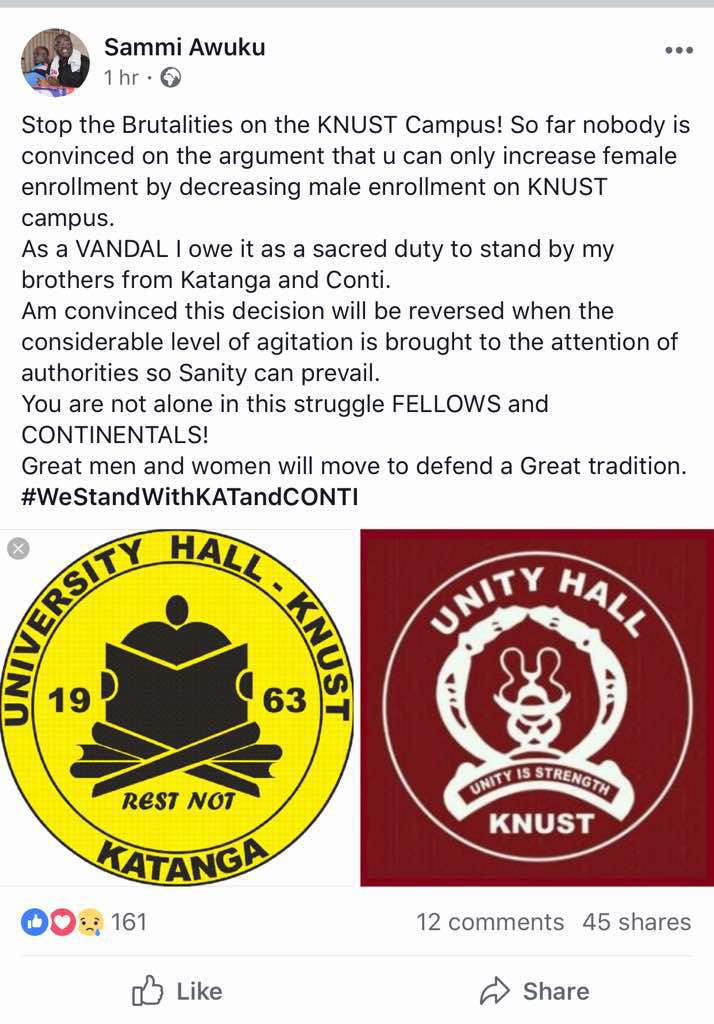 Management of the school, converted its all-male University and Unity Halls, known as Katanga and Conti respectively, as well as the all-female Africa Hall into mixed ones despite protests.

This was after a Kumasi High Court struck out an injunction application case seeking to restrain the management of KNUST from converting two male halls of residence of the University into a mixed one.

Alumni of the Unity and University Halls had sought an injunction application against the conversion.

They have argued that the conversion will be eroding the heritage and identity of the halls.

The school’s management says it took the decision in line with the university’s policy of periodic review of Residential Accommodation for students.

It said the move was in line with the school’s policy of expanding access to female students.

Signals from the government are that it is in support of the conversion.

He further urged other universities to emulate it.

“KNUST has made a major statement and held also by the courts of law.  New emerging institutions have to adjust themselves. That is the kind of cohesion that the world wants. We continue to perpetuate the exclusive male and exclusive female in our setting in the light of reality. It will not happen in the realization of the national development plan.”
–citinewsroom