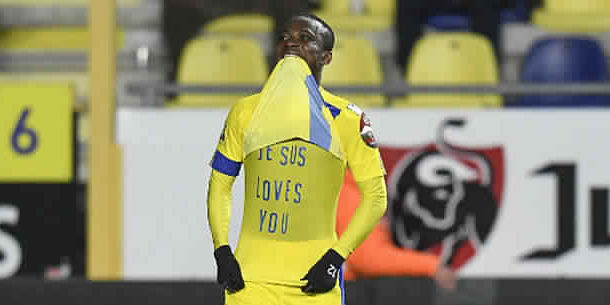 Ghanaian international Samuel Asamoah is the 5th best accurate passer of the ball in the Belgian JPL, according to rankings made by voetbalnieuws.be.

With 50 passes per every '90 minutes 88.79% accuracy , the Sint-Truidense Voetbalvereniging midfielder was named  among the first five with his splendid performances in the League which is on break..

However his Ghanaian compatriot Elisha Owusu came number 1 in a list of ten.

Samuel Asamoah made headlines this season with his unexpected hat-trick against Eupen, followed by ... a red card. The 25-year-old Ghanaian pulled his shirt over his head after his third goal to show a message from Jesus, but ref Christoph Dierick turned out not to be of the faithful type and promptly shoved a second yellow cardboard under his nose.

The midfielder's name was immediately made, although his footballing qualities also deserve attention. New trainer Milos Kostic, however, had no eye for that until his showing against his ex-club, although the Canaries could have used his accurate passing after New Year too well. After all, under Marc Brys Asamoah, more than once, proved his worth as a holder. An often underestimated player, as it turns out again, with his place in the top five.

The corona virus is currently laying down European football, so no matches are being played in the Jupiler Pro League.
But the ranking was done based on those 29 games played, and considered player who have excelled in a number of key elements of the game.

The ranking eventually retained  only central midfielders who played at least 15 games, of which 10 as holders, and who sent at least 35 passes per 90 minutes on average.