Samuel Eto'o hints of a career in coaching 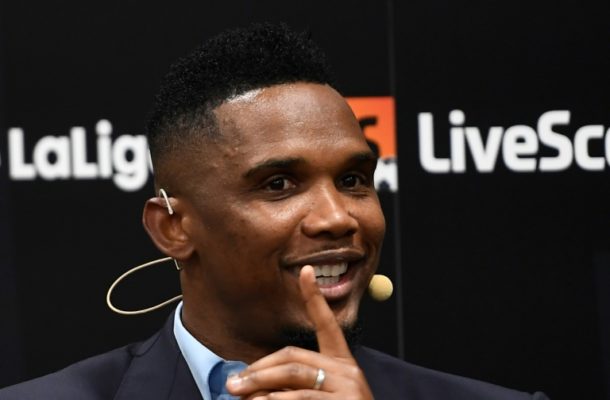 Cameroon legend Samuel Eto'o says that he is targeting a career in coaching after bringing to an end his stellar career this he told AFP in an interview in France.

The 38-year-old is pondering his next step after hanging up his boots in early September, bringing the curtain down on his playing days with a brief spell turning out for Qatar Sports Club.

"There comes a point where you have to look for other challenges. That is what I have chosen to do. I have had a wonderful career," Eto'o told AFP during a visit to Paris.

His career spanned more than 20 years in which he won 18 major trophies, including two Champions Leagues with Barcelona and another with Inter Milan. He also won the Africa Cup of Nations twice with Cameroon as well as Olympic gold in 2000.

One prize that did get away from him, however, was the Ballon d'Or. Liberia's George Weah, in 1995, remains the only African to have claimed that award, but that does not change Eto'o's belief that he is the best player to have come out of the continent.

"Everyone is entitled to their opinion. You know, as an African, you are always being judged. What is unacceptable is that the first people to do it are always the Africans. They can't take anything away from me because I am proud to be African.

"When I look at where I came from and how far I got, I tell myself that I am entitled to be proud. That doesn't mean I am big-headed, far from it. It is just that, in this world, people like puppets and I don't accept being one."

Eto'o also turned out for the likes of Real Madrid and Chelsea, but for all he won in the game, it is his first major title with his country that sticks out when asked for his fondest memory.

"I would say my first Africa Cup of Nations (in 2000), because it was my first AFCON, an unforgettable moment, and I had come away from the 1998 World Cup in France with the hope of making history," he said.

"I wasn't a starter in that magnificent team but in the end I worked my way into the side and contributed. It is a beautiful memory."

Eto'o also went to four World Cups but never got beyond the group stage with the Indomitable Lions.