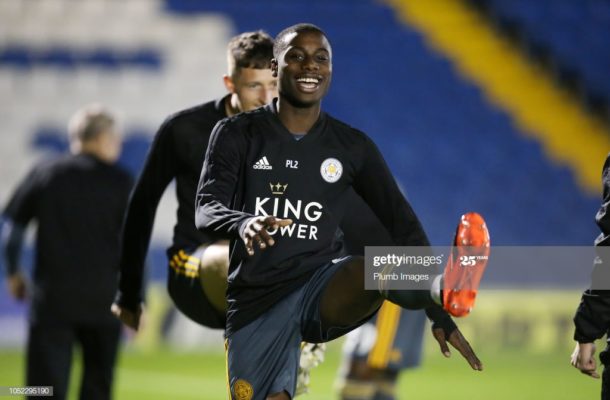 BURY, ENGLAND - OCTOBER 16: Dennis Gyamfi of Leicester City warms up ahead of the Checkatrade trophy tie between Bury and Leicester City at Gigg Lane on October 16, 2018 in Bury, England. (Photo by Plumb Images/Leicester City FC via Getty Images)

The race for the signature of Ghanaian prodigy Dennis Gyamfi is gradually turning out to be a neck on neck tussle amongst several European football clubs.

The latest to join an the queue is Scottish giant Glasgow Rangers who are determined to make the Leicester City defensive sensation their first signing of the summer.

The 18-year-old defender whose contract with the Foxes expires this summer has been penned as the ideal replacement for James Tavernier who turns 29 later this year at Ibrox.

Latest information on Gyamfi who is still eligible to play for Ghana suggest that Feyenoord and Arsenal are also knocking on the doors of the young defender making matters a little bit complicated.

Hector Bellerin is yet to find his form since returning from injury and this situation is forcing Mikel Arteta to start looking elsewhere for an option.

Glasgow Rangers have already signed Calvin Bassey and are confident that they’ll get his teammate [Gyamfi] on a similar deal to Ibrox.

Reports from the Netherlands also indicate that Feyenoord manager Dick Advocaat is also eyeing the young Ghanaian right back.

Gyamfi’s style of play is similar to Manchester United’s Aaron Wan-Bissaka and the Young defender has been tipped to leave the King Power stadium this in search of regular first team football.