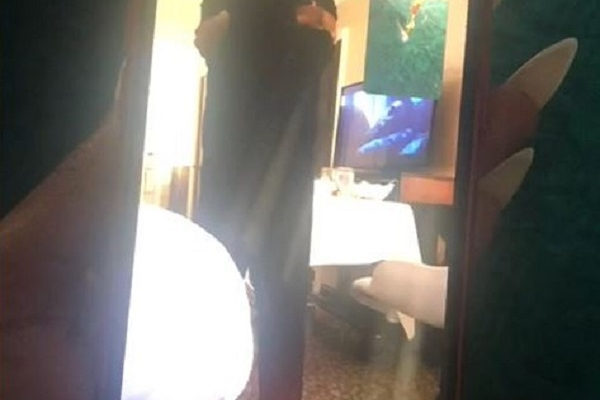 Albert Kan-Dapaah captured on the video

Ghana’s Minister of National Security, Albert Kan-Dapaah, became the latest victim to the activities of Selassie Gertrude Bedzo, whose dirty trade came to the attention of The Herald some nine years ago, has been captured in a video, modeling in his pyjamas, for the notorious lady in a video-chat.

The Herald’s investigations at the time, led to a series of publications, revealing her sexual escapades with Professor Christopher Ameyaw-Akumfi, a former Minister in the erstwhile John Kufour government.

The Akatsi-born Selassie, targets people in high places, especially Ministers of State to prey on. She speaks some degree of French with which she poses as a French lady to her victims. She learnt to speak French from her days in Cote d’Ivoire, living with an Auntie.

She is a diehard member of the governing New Patriotic Party (NPP) and there are reports that the government is currently into a poultry farm project with her through a Public-Private-Partnership (PPP) arrangement.

The project is said to be near Ada in the Greater Accra Region under the government’s One-District One Factory (1D1F) Programme, The Herald ,has learnt from credible sources.

Selasie, a product of OLA Girls Senior Secondary School – Ho Volta Region, resides in Canada with her husband and children.

Only the long-nailed fingers of the lady could be seen in the leaked video chat.

She is known in Akatsi as the daughter of “Jolly Bebe”, a name her mother bears by virtue of a drinking bar she operates in the town. The name of their village is Bedzokope, near Akatsi.

In the amorous chit-chat, the national security chief, appeared to have let down his guard down and was totally under the control of the voice of his seductive interlocutor.

Selassie, who has several aliases, is heard asking Mr Kan-Dapaah, if he would miss her, while he was on the plane.

“Are you going to miss me when you’re on the flight?” the lady asked the minister, to which he replied: “Of course!”

The lady, who would not show her face, then asked the minister, what he was wearing and asked to see it.

“I want to see your pyjamas; I want to see the front, the back; like the way you did it yesterday”, she demanded of the minister, who then stood up and modeled in his pyjamas for his interlocutor.

“Turn around let me see it, is it trousers or shorts, raise your legs; nice, wow, what brand is that, it’s nice, you have good taste, yeah”, she said.

He then said: “I wish I can hug you like that day and it was so nice; it put me to sleep immediately”.

“The last time you did, didn’t it put me to sleep?” he asked the lady whose long nails and fingers with which she held the phone showed.

“It did, it put you to sleep”, she affirmed.

The minister then said: “I’m going to the bath now to have a bath with you; we’re going to bath together”.

The lady then refers to Mr Kan-Dapaah as “babes” and then the Ministers responded: “I love you”.

About nine years ago, she had a court case in which a man accused her of collecting his money, in order to supply him cars from Canada.

She is expected back in Ghana, in the coming days to bury one of her brothers who passed away recently.

There are reports that the Presidency, have had a meeting over the matter, but there is no concrete decision on what President Akufo-Addo will do with his National Security Minister.

Meanwhile, the National Democratic Congress (NDC) Member of Parliament (MP) for North Tongu in the Volta Region, Samuel Okudzeto Ablakwa, has advised Ghanaians not to rejoice over the fall of their enemy.

Mr Ablakwa’s comment, follows the leak of a video of National Security Minister, in which he was engaged in an intimate conversation with his alleged side chic.

The video has since sparked talk on social and traditional media with many people condemning the minister for his actions.

However, Mr Ablakwa has advised, using the scriptures, saying “do not rejoice when your enemy (or political opponent) falls; and do not let your heart be glad when he stumbles. – Proverbs 24:17 I will rather we learn useful lessons to guide our future. Wish you all a great week, my friends”.