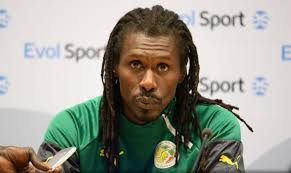 Senegal Head Coach Aliou Cisse reckons more African coaches are needed to take football on the continent to the next level and develop teams capable of challenging for the World Cup.

Cisse who was captain of The Teranga Lions when they reached the 2002 quarterfinals is the only black coach at this year’s mundial, a statistic he finds ‘disturbing’.

”I am the only black coach in this World Cup. That is true,” ”But really these are debates that disturb me. I think that football is a universal sport and that the color of your skin is of very little importance.”

”I think we have a new generation that is working, that is doing its utmost, and beyond being good players with a past of professional footballers,” Cisse said. ”We are very good in our tactics, and we have the right to be part of the top international coaches.”

The 42 year old trainer, whose Senegal side open their World Cup campaign in Russia with a 2-1 victory against Poland on Tuesday, said African teams would eventually be as successful as the European and South American giants.

”I have the certainty that one day an African team, an African country, will win the World Cup,”. ”It’s a bit more complicated in our countries. We have realities that are not there in other continents, but I think that the African continent is full of qualities. We are on the way, and I’m sure that Senegal, Nigeria or other African countries will be able win, just like Brazil, Germany or other European countries.”