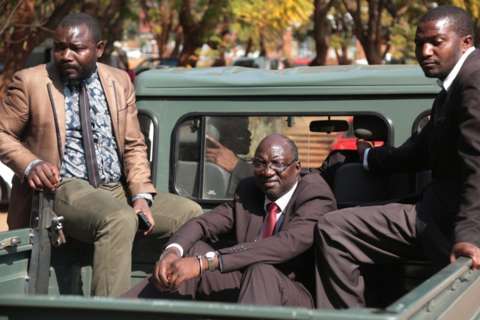 Zimbabwe's police have arrested a leading official of the war veterans association as he stepped out of a courthouse where a colleague was answering charges of insulting President Robert Mugabe, the Associated Press news agency reports.

Victor Matemadanda, the Zimbabwe National Liberation War Veterans Association's secretary-general, was the second official detained in a crackdown on the association's leaders, it adds.

Last week, Mr Mugabe said war veterans who were behind a statement which accused him of being dictatorial and egotistical would be identified and severely punished.

Mr Matemadanda would be charged with insulting or undermining the authority of the president, said Irene Petras, the director of the Zimbabwe Lawyers for Human Rights group, AP reports.

This is the same charge that the association's spokesman Douglas Mahiya is facing following his arrest on Wednesday, she is quoted as saying.

The statement issued by the war veterans said they would not support Mr Mugabe, 91, in elections due in 2018.