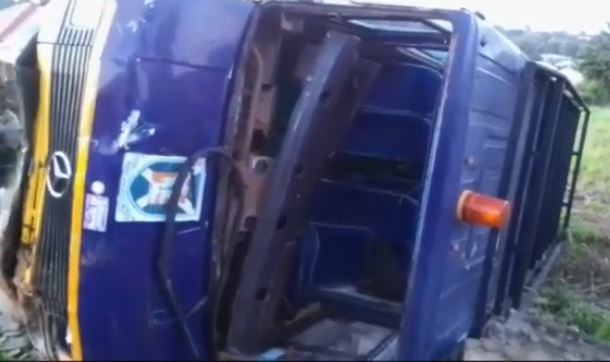 About seven children have been injured with another left unconscious after their school bus was involved in an accident at Adiembra at Asante Mampong.

The accident reportedly occurred on Thursday while the pupils of the Emmanuel Presbyterian Model School were on their way from school.


He said he lost control while dropping the pupils at their various homes, veered off the road and crashed into a container by the roadside which caused the bus to somersault.

It eventually crashed into a wall while the bus landed on its side.

Fortunately, he had alighted most of the pupils and was at the last point to drop the final set when the incident happened.

At the time of the incident, 12 pupils were onboard and seven got injured.

They were rushed to the Mampong Municipal Government Hospital for treatment and discharged.

An unconscious pupil was, however, referred to the Komfo Anokye Teaching Hospital for treatment.