'Sexy' Anglican priest in trouble for kissing student on the pulpit 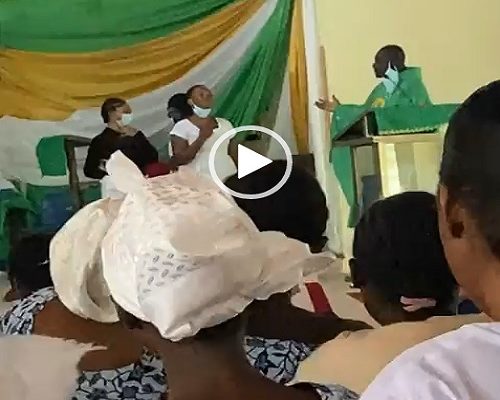 The priest was filmed kissing student on the pulpit

The leadership of the Anglican Church, Ghana under Most Reverend Dr. Cyril Kobina Ben Smith has instituted a probe into the kissing spree involving a Priest and some students of the St Monica’s College of Education, Asante Mampong Diocese in a video that has gone viral on social media.

According to the church, the priest would be dealt with if found guilty in accordance with the norms and values of the Anglican Communion which abhor immorality.

Midday yesterday, social media was buzzed with a video involving an ordained Reverend Father who happens to be the chaplain of the St Monica’s College of Education giving some female students of the school deep kisses on their lips.

In the video, the Reverend Father who was seen clad in his green cassock pulled each of the students towards him and gave them a passionate kiss in turn to the ecstasy of other students.

However, the leadership of his church which expressed shock and sadness about the whole incident in a statement issued Tuesday morning signed by Venerable Dr. George Dawson Amoah, Executive Director to Metropolitan Archbishop of Ghana said “thorough investigation has immediately been instituted into the matter and action of the said Priest would be dealt with in accordance with norms and values of the Anglican Communion where morality is extremely revered in the Church.”

In furtherance to that, the church said it is also making efforts to seek psychological help for students involved in the matter through a counseling session.