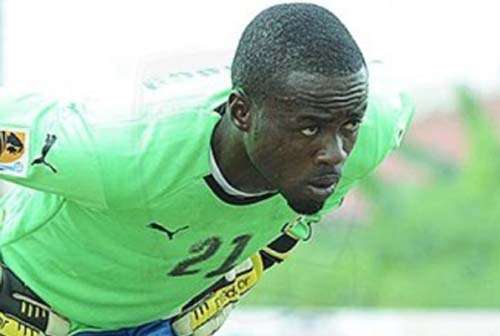 Goalkeeper Joseph Addo has been stripped of the Aduana Stars captaincy in a sudden shake-up that has seen Striker Yahya Mohmmaed to pick up the mantle.

The decision, according to management of the club, was  solely made by Head Coach Kenichi Yatsuhashi.

“It is the coach who says he’s made changes in the leadership of the playing body. I’ve heard he’s given the captain to Yahaya Mohammed,” the Deputy PRO of the club Oppong Evans said, as quoted by 442gh.com.

Addo, 27, was named skipper of the Ogya boys , replacing Godfred Saka, who left to jojn Karela FC early this season.

Prior to their game against AS Vita Club in the Caf Confederation Cup, the  Japanese-American  expelled the striker Sasraku from camp for an act of indiscipline as he was involved in  a training ground bust-up with assistant coach Tandoh.

It is however not known what might have precipitated the sudden change in leadership by Kenichi,who joined Aduana from Inter Allies.

“I can’t tell why he did that,” Evans added.

Kenichi was appointed the club’s substantive head coach a week before Aduana Stars’ game against AS Vita in the CAF Confederations Cup after coach Yusif Abubakar was sacked a day before.

Aduana Stars will travel to DR Congo to take on AS Vita in the first return leg game in the group stages of the CAF Confederations Cup on Sunday.