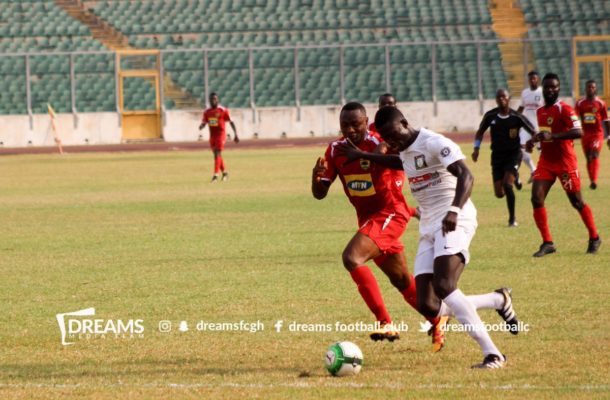 George Dwubeng emerged the hero for Dreams FC as they secured a narrow 1-0 victory against Asante Kotoko in the Ghana Premier League at the Theatre of Dreams on Sunday.

The Porcupine Warriors came into the game at the back of an unconvincing 2-1 win against Ebusua Dwarfs in midweek and were hoping to build on their performance.

Kotoko controlled most parts of the game but were guilty of missing some really good opportunities to make their dominance count.

Dreams however grew into the game as it progressed and were assured in possession especially in the second half.

Just as the game looked destined for a goalless draw, super sub Dwubeng came up with a dramatic late goal for the hosts in the 90th minute to edge it.

He slide the ball past the onrushing Kotoko goalkeeper after a sweet one-two with Sharani.

Dreams have now recorded their first ever victory against Kotoko in Ghana’s top-flight division.