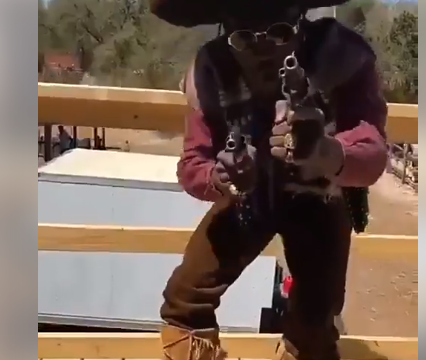 Controversial dancehall musician Shatta Wale has for the first time, since they broke off, commended his former manager Bulldog for his role in securing a location for the video shoot of his new song.

Shatta who was spotted dressed like a cowboy at a location in Texas in the United States said he was grateful to his record label Zylofon for the efforts they are making in his career.

“Shout out to Zylofon, to all my people in Zylofon and the team working to make this happen. Thank you enough to Bulldog, you guys have been supportive; we’ve been here, I like the location,” he said in a video posted on Facebook.

Shatta Wale and Bulldog went separate ways in 2015 after working together for three years.

“Bulldog has not worked effectively as a manager and I wanted to sack him. I had already written a letter which I was going to put out there and they knew about it but they have written first to say they are no more working with me. In a nutshell, they knew I was going to write to them because I had already made my plans known to them,” Shatta said in an interview after they went separate ways.