SHOCKER: I used my last 'menses' to prepare banku and pepper for cheating boyfriend 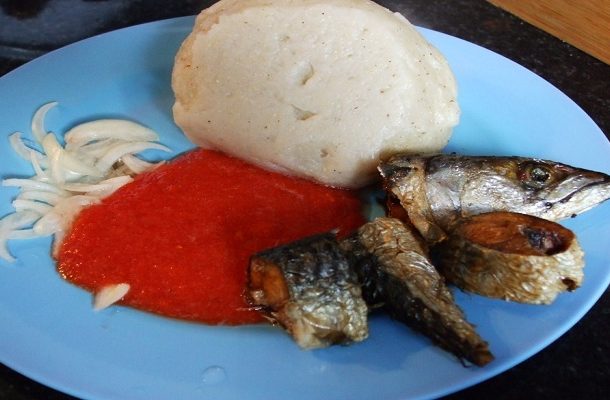 A lady whose name was only given as Rita has shockingly revealed she used blood from her last menstruation to prepare banku and pepper for her boyfriend of 5 years.

The boyfriend whom Rita loves so much had cheated on her in the last Christmas by sleeping with her own friend.

According to Rita, "I also decided to punish him by using my last month menses to prepare banku and pepper mixed with tomatoes for him to eat".

Rita, who has regretted for her actions wrote to Celibritiesbuzz seeking its counseling on what to do since she is still in love with her guy.

Read the full message below:

Hi Celebritiesbuzz, my name is Rita from Nima, I have done something to my boyfriend who has been cheating on me with my best friend for a couple of months now that I want to share with you.

I have regretted it but I also think that’s the best way to punish him for cheating on me. During Christmas, he told me that, he will be travelling to see his mum in Kumasi which was a total lie. He didn’t travelled to Kumasi as he told me rather he went and enjoyed the Christmas with my best friend at her house in Ashaiman.

Can you imagine how much I love you him before he is doing that to me…. we’ve been dating for 5 years but he never talk about proposing to me and putting a ring on my fingers. He slapped me twice when I tried asking him about the relationship between him and my friend Anita and I also decided to punish him by using my last month menses to prepare banku and pepper mixed with tomatoes for him to eat.

He ate the food and wanted to sleep with me the same night and I refused. I still love him because he is my first guy and now my conscience is disturbing me and I don’t know what to do… I can see that, he is really in love with my friend Anita and I am all frustrated right now.

Please kindly help me out…. what should I do now? Should I tell him or not? Do you have any advice for me? 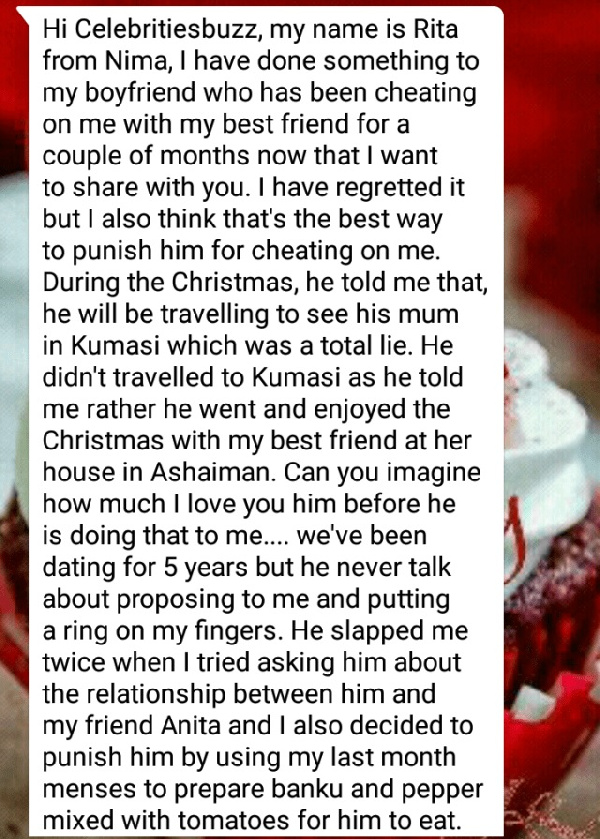 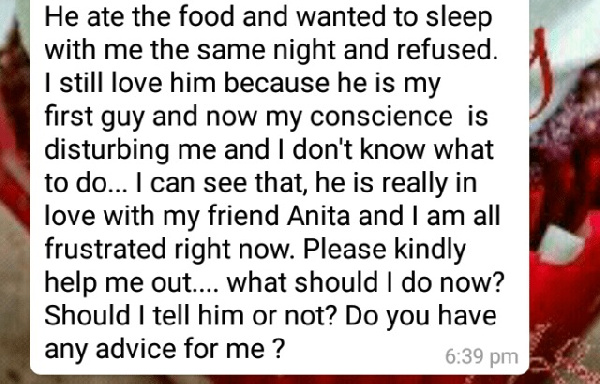