Should West Brom stick with Sam Allardyce next season? 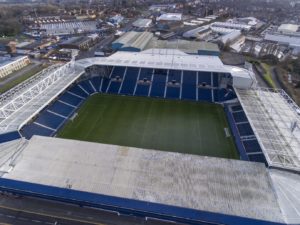 As the gameweeks tick by, relegation looks all the more likely for West Bromwich Albion. Despite the odd glimmer of hope that survival was still on the cards with good results here and there, it’s now only a matter of time before the Baggies are back playing Championship football at The Hawthorns.

It’s hardly a surprise that West Brom are all but destined for the drop. They have been one of the more favoured sides in the Premier League relegation odds since the opening day of the 2020-21 season, and those that backed the West Midlands side will be waiting patiently for their winnings to hit their account.

It’s fair to say that West Brom have thrown the kitchen sink at trying to stay up. Slaven Bilić was sacked and replaced by survival expert Sam Allardyce in mid-December. The veteran has certainly helped their cause with a string of decent results since, but with 10 points separating them and Newcastle United with just four games left to play, it looks as though they haven’t done enough.

At this stage, there’s no doubt that the club’s chiefs have started planning for relegation and one thing they definitely would have discussed is Allardyce’s future at The Hawthorns. The 66-year-old signed an 18-month contract back in the festive period, which included a clause confirming he would remain in charge should he save the club from the drop.

With that clause looking unlikely to be triggered, the ball will be in the hierarchy’s court. Allardyce has made it clear he wants to stick around for the remaining year of his contract, recently saying: “We will see it to the end of the season no matter what, the only way you are getting me out of here is if you sack me.

“I thought we changed as much as we possibly could as quickly as we possibly could. We did better business in the Premier League than any other club in January with the quality of the players, the price and the difference they have made to the team.

“While we said a few more games or a bit more time [might have been needed] we didn't really need it because when I look back prior to us winning against Chelsea and Southampton, we should have won three or four games prior to that.

"We did have enough time, we just failed to take the clear-cut chances we created. It's not so much me, it's more about the club. I'd love to be sitting here with more points on the board.

"We'd have liked to have given ourselves a better chance. I'd be disappointed (with relegation) with my record of keeping clubs up but the lads have tried their best up until now. We might fall short but it hasn't been for the want of trying."

The fans haven’t been at The Hawthorns to make their feelings clear this season, but we’re sure Allardyce has done enough to win the backing of the club’s supporters. It’s clear that the former England boss has significantly improved the side since he took over from Bilić, and should he be given the opportunity to lead West Brom back to the Premier League, you’d have to fancy his chances of doing so.

His wealth of experience is invaluable to a club like West Brom, and he’s no stranger to the Championship having gained promotion with Bolton and West Ham. There’s a lot for the club’s chiefs to consider over the coming weeks but sticking with Allardyce could well result in promotion this time next year.