Sister Derby lied; I never had an affair with Fella or save her name as Carpenter - Medikal FIRES 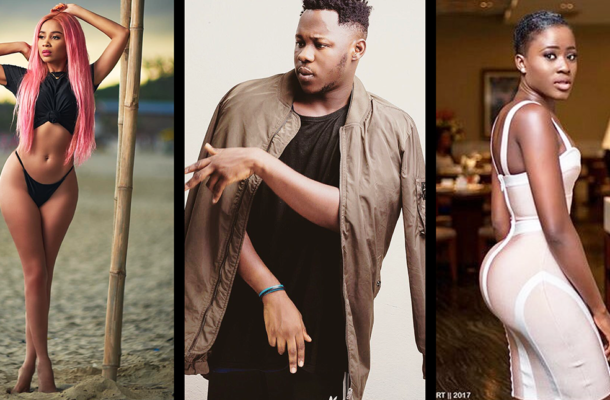 The ongoing brouhaha between rapper Medikal, his current girlfriend, Fella Makafui and his ex girlfriend, Deborah Vanessa seem to be unending.

The 27 year old hip hop artiste has finally responded to allegations by his ex-girlfriend Sister Derby that he saved actress Fella Makafui’s name as “Carpenter” when they were dating in an attempt sway her.

She revealed that the 'Too Risky' hitmaker saved Fella Makafui's name as Carpenter to wade off any sort of suspicion from her.

“Cockroaches or lizards to be hiding your relationship,” was one of the subtle jabs in the song.

Getting to the end of the song, Sister Derby who doubles as an actress disclosed, “You have stored her name carpenter, change mine to plumber.”

Reacting to the allegations in an interview on Daybreak Hitz on Hitz FM with Andy Dosty, the rapper said there was no truth to that.

Asked his relationship with Sister Derby, who was eight years older than him, “she was my girlfriend…it was a very healthy one…we were cool.”

He explained that things did not go well and they had to go their separate ways.

When Andy Dosty drew his attention to reports that people are not happy with him for leaving Sister Derby, Medikal responded that “I don’t know why people are angry.”

He explained that it could be because they are celebrities and people fell in love with both of them. The rapper urged people to move on.

Medikal was quick to refute allegations that he cheated on Sister Derby. He stressed that he never had any girlfriend aside Sister Derby.

When Andy Dosty sought to find out if he was having an affair with Fella while he was dating Sister Derby, the rapper responded, “I wasn’t having any affair with her,” and that, he only started dating Fella Makafui after he broke up with Sister Derby.