Some of the world's most boring jobs 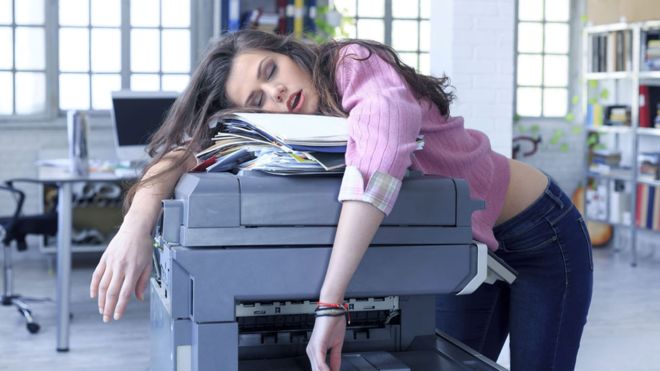 What is the most boring job you have done?
We asked readers this question after publishing a story about Frenchman Frederic Desnard, who says his 80,000-euro-a-year job as an executive in a perfume business is so boring it has turned him into a "professional zombie".

Here are some of your replies.

I tested the temperature of frozen peas for a whole summer. I used to dream about endless rivers of little green balls. Jane, Yate

My sister had a summer job on a farm in France throwing small amounts of earth on to trays of organic potatoes destined for the supermarket - presumably in order to make them look more "organic". Chris Cooke, Suffolk
I had a summer job as a student squeezing plastic milk bottles for 12 hours overnight to see if they leaked. When they did you smelt of sour milk by the time you went home. Mark Thomas, Manchester

Filling pork pies with jelly one at a time to ensure the "handmade" label. Leigh Dickinson

I put pepperoni on 14,000 pizzas per day at a factory in Nottingham. If the conveyor belt broke down, we made smiley faces on the pizzas with the pepperoni. So if you ever see a smiley pizza, that's why. Pete Minting, Helensburgh

Working at a pork scratching factory removing the ones that had been cooked but still had hairs to then be re-cooked, to burn them off. I had 12 hours a day just watching them go past on a conveyor belt. I left after two weeks and have never eaten one since. Maria, Sheffield

Slicing 50lb (23kg) slabs of cheese into four parts, in a room with white walls, harsh fluorescent lights, no windows and no radio... At break one day, I asked someone what had happened to my predecessor and was told that he'd picked up a slab of cheese and thrown it at the wall and nobody had seen him since. He'd been there for three months, so obviously a man of Olympic determination - I lasted around nine days. Rob, North-west UK