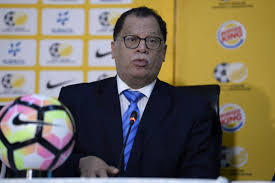 South Africa will briefly put aside its diplomatic differences with Morocco when the country’s football head attends meetings to be held in the North African country on Saturday, SAFA President Danny Jordan has said.

Danny Jordan, South African Football Association (SAFA) President, will attend a symposium to be held in Laayoune on the sidelines of the Futsal Africa Cup of Nations which his country recently withdrew from (boycotted).

Jordan also confirmed he would also attend a study day on the development of football infrastructure and a Confederation of African Football (CAF) executive meeting set for February 1 and 2 at the iconic Mohammed VI Football Complex of Maâmora in Salé, a city in north-western Morocco.

“We have received the invite and we will be attending,” Jordan told CAJ News Africa.

He could not be drawn into the controversy that saw SAFA pull the South African team from the Futsal Africa Cup of Nations.

The snub, which is the latest in a series of diplomatic tiffs between Morocco and South Africa, has dominated the run-up to the competition. Fellow Southern Africans, Mauritius have replaced the South African squad.

The continent’s top indoor football nations will converge in Laâyoune, the largest city of the disputed territory of Western Sahara for the tournament that would see three teams qualify to represent the continent at the Futsal World Cup in Lithuania later this year.

Nonetheless, SAFA’s drive to take the country’s game a notch higher will get a boost when they exchange notes with other African federations during the study day organised by the Federation of International Football Associations (FIFA) in conjunction with CAF in Morocco.

The Royale Moroccan Football Federation this week confirmed over 200 representatives of African football associations would attend.

FIFA president, Gianni Infantino, and his CAF counterpart, Ahmad Ahmad, will also be in attendance.

Infantino returns to Africa on the back of his November 2019 commitment to invest more than $1 billion (R14,53 billion) in the African game and establish an African league.

He was in the Democratic Republic of Congo (DRC) to celebrate the 80th birthday of one of Africa’s biggest clubs, TP Mazembe.

“We want to bring Africa to the highest of heights and show the world the outstanding talent and amazingly gifted players the continent possesses,” he said at the time.

At the centre of his three-pronged strategy is infrastructural development in Africa.

Past World Cup hosts South Africa are battling to manage stadiums from the 2010 global soccer showpiece.

South Africa spent $1,1 billion on its 2010 venues, some of which are reportedly losing money.