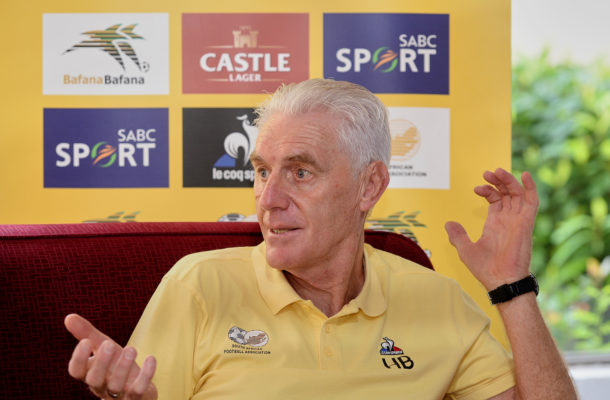 Bafana Bafana head coach Hugo Broos during a one on one interview with South African Journalists at the Elmina Beach Resort, Cape Coast in Ghana on 13 November 2021. ©Thabang Lepule/Backpagepix

Head coach of the South African senior national team, Hugo Broos has given a damning but frank assessment of the current problem facing the rainbow nation.

He says that the much heralded South African Premier Soccer League lacks quality so the national team lacks quality players as compared to Ghana.

According to the Belgian gaffer almost all of Ghana's players ply their trade in the major league across Europe whiles the bulk of Bafana Bafana players play in the South African Premier Soccer League which he thinks lack quality.

In a press conference the septuagenarian, gave a candid assessment of why South Africa's last three opponents  that is Ghana, France and Morocco are better  than them.

South  Africa recently lost to Morocco in the 2023 AFCON qualifier and the team has struggled in recent times.

The gaffer said: “Now is the time to face the real problem, and the real problem of SA is that we don’t have high-quality players, like our last three opponents, Ghana, France and Morocco.

“For Morocco, only one player from Wydad Casablanca featured, and he is the goalkeeper in the squad that played against us.

“The rest of the team is playing for big clubs like Fiorentina, Sevilla and PSG, and we don’t have such quality players in Europe.”

Bross added: “We can look at the fantastic race that Mamelodi Sundowns and Orlando Pirates did on the continent, but Sundowns lost in the quarterfinal stage of the Champions League, and Pirates lost in the final of the Confederation Cup.

“Two Moroccan teams in Wydad and RS Berkane won those competitions, and in the Moroccan team, there was no player from those teams in the national team except the goalkeeper. Let’s face it, the problem of SA is that the level of the PSL is not high enough.”

Ghana defeated the Bafana Bafana of South Africa 1-0 at the Cape Coast Stadium in a 2022 World Cup qualifier game which nearly marred Ghana's relationship with the South Africans as  they accused Ghana of match fixing and lodged complaints with FIFA but they were dismissed.

The Black Stars have mostly had the beatings of South Africa in recent times when it matters most.