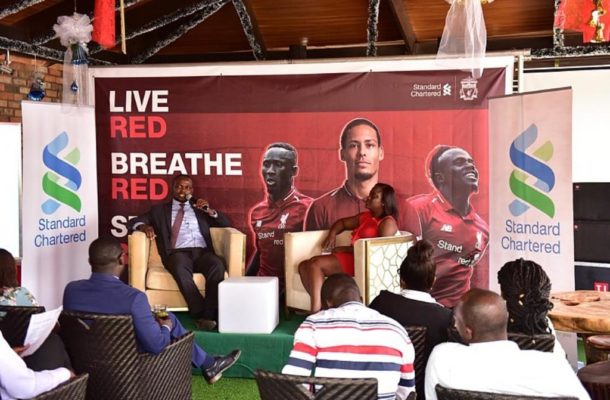 It is an international 5-aside football tournament that provides Standard Chartered markets a platform from which to actively engage football fans and the bank’s clients.

It is hinged on the bank’s Liverpool FC sponsorship and is an opportunity for Standard Chartered to reinforce the partnership with Liverpool FC.

The winning team of the local tournament will be flown to Anfield, the home of Liverpool FC to join winners from other markets to play in the final tournament’ to determine which team wins the Standard Chartered Trophy 2020.

The bank has invited selected client teams to compete on Saturday, February 29, 2020, at the Athletic Oval, University of Ghana, Legon and will also host a soccer clinic for children at the same venue.

The Head of Corporate Affairs, Brand and Marketing at Standard Chartered Bank Ghana Limited, Asiedua Addae, said ‘we are once again very thrilled to host this fun-filled interactive sporting tournament for our clients by leveraging on the Standard Chartered – Liverpool FC sponsorship.”

“This year marks 10 years of the sponsorship. We continue to make the dreams of many Ghanaians come true by providing a money-can’t-buy experience for our clients,” she said.

Ghana has been participating in the SC Trophy Tournament since 2015 and provided the opportunity for staff, clients and media personalities to watch Liverpool FC home games at Anfield.

Three client teams, winners of the local tournaments, GNPC in 2016, EIB Network in 2018 and Wilmar Africa in 2019 have competed in the ‘Finals’ at Anfield.

The teams received coaching from Liverpool legends to prepare for the finals at the Liverpool Academy, visited Melwood, the training grounds of Liverpool FC, enjoyed a complete tour of Anfield, home of Liverpool FC and watched a home match.

Team Wilmar the reigning champions represented Ghana at the 2019 SC Trophy Finals in Anfield, home of Liverpool FC where they beat Team Hong Kong with a lone goal to emerge the winners.