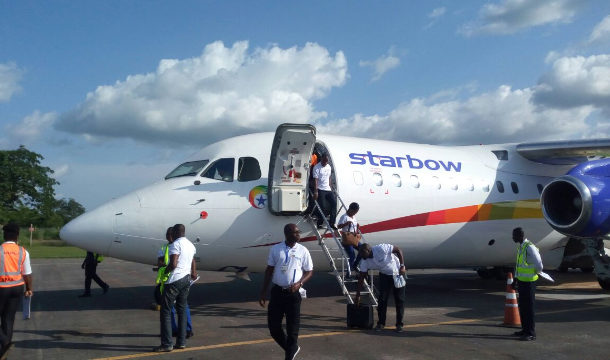 Troubled local airline company Starbow has directed some of its staff to go home.

About 200 staff have been affected by the action.

It is unclear the reason behind the dismissals but a source at the airliner has confirmed to StarrFMonline.com that the decision has been sanctioned by top management of the company.

“We write to serve you this days’ notice of termination of your employment contract effective November 30, 2017.


“In accordance with the termination clause of the existing agreement between you and the company, the company is formally exercising its right to the said agreement. On your last day of work, kindly liaise with the Human Resource and Administration Department to submit all company assets in your possession, including but not limited to ID cards, equipment, cell phones, work products (electronic and paper files) etc.

“Upon receipt of these items, the payment of any outstanding amounts as stated due will be authorized,” a letter distributed to the staff Monday noted.

On Saturday November 25,  a Starbow Airline aircraft on a flight from Accra to Kumasi overshot the runaway at Kotoka International Airport as it attempted takeoff.

The plane, with 63 passengers and five crew members, ended up in the fencing around the airport, leaving dozens of passengers traumatized.

Deputy Energy Minister, William Owuraku Aidoo, was one of the passengers aboard and suggested that bad weather could have contributed to the failure of the pilot to get the aircraft off the ground. He confirmed that most of the passengers were traumatized.