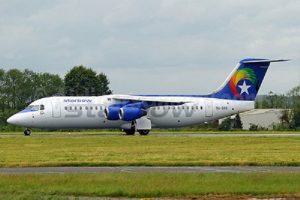 Local airline, Starbow, has sacked scores of its workers.

It is unclear how many workers have been dismissed, but Citi Business News has gathered that the dismissal affected top management, flight and grounds staff.

A letter sighted by Citi Business News signed by the CEO of the company, James Eric Antwi, stated that contracts of workers have been terminated effective November 30, 2017.

The letter further directed the workers to submit all their IDs and other company assets in their possession to the administration.

“We write to serve you this days’ notice of termination of your employment contract effective November 30, 2017.”

“In accordance with the termination clause of the existing agreement between you and the company, the company is formally exercising its right to the said agreement”.

It added that, “On your last day of work, kindly liaise with the Human Resource and Administration Department to submit all company assets in your possession, including but not limited to ID cards, equipment, cell phones, work products (electronic and paper files) etc.”

“Upon receipt of these items, the payment of any outstanding amounts as stated due will be authorized.”

It is unclear whether the dismissals have anything to do with the recent incident involving one of the company’s aircrafts or due to operational challenges facing the airline.

A Kumasi-bound aircraft skidded off the runway at the Kotoka International Airport on Saturday, November 25th when it was preparing to take off.

The Director General of the Ghana Civil Aviation Authority, Mr. Simon Allotey,  had told Citi Business News the GCAA will investigate the operations of Starbow and proffer the necessary sanction if it is found culpable in the accident.

“We are as part of the investigations, going to have a review of Starbow as an organization not just their maintenance, but a total review of their management, their structure, their training, qualifications and all that to be sure as part of a broader safety management system everything is being done right,” he told Citi Business News.

Mr. Allotey added that, “We will ask them to effect the necessary corrections, and we will impose sanctions where there are serious infractions, but where it just needs a corrective action, we resolve the safety concern through asking the company to do a corrective action plan, give them a timeline to implement it and we review and approve.”

Starbow is one of the two domestic airline companies operating in Ghana.

It has been in operations since September 2011. Already, three airlines, CityLink, Antrak and Royal Fly Gh, are yet to resume operations after suffering a similar fate about four years ago.

A statement from Starbow at the time said, it had “suspended its operations with immediate effect.”

It added that “guests with future reservations are invited to contact the airline at 024 500 0000 to make alternative travel arrangements.”

The statement also quoted the Chief Executive Officer of Starbow, Eric Antwi, as saying “All of us at Starbow at this time remain dedicated to our guests, our crew and their families. Their safety and wellbeing are at the heart of everything we do, and we will cooperate fully with the Ghana Civil Aviation Authority, and other agencies, to determine the cause of this incident. We hope to be able to provide further information in due course.”

The incident added to previous mishaps involving Starbow flights in 2014 and 2015. A passenger on board the plane had suggested that the pilot ignored bad weather on that fateful day.

A statement from the Emergency Operations Centre of the Kotoka International Airport also said an investigation is being carried out.