Stats from Kotoko's 3-0 win over Nkana 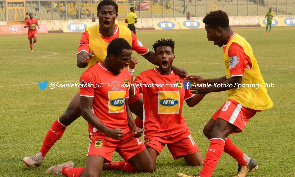 After losing away to Nkana FC 3-1 in the CAF Confederation Cup group stage Asante Kotoko took their revenge on Sunday with 3-0 win and leaped from the foot of Group C to the second position on 6 points.

The Porcupine Warriors adopted an attacking approach coupled with a disciplined back line, which eventually paid off for coach Akonnor, who was under huge pressure to react following the Zambian debacle. Here are some stats from the match that show how things transpired at the Baba Yara Stadium in Kumasi.

Both teams were tied in tackles success at 67% each, evidence of the high intensity displayed in the clash.

Despite the 3-0 loss, Nkana had a considerably fair territorial advantage of 48% slightly less than Kotoko’s 53%.

Determined to dictate the pace of the game at their home ground, Kotoko were chasing every ball, eventually recording a ‘very high’ ball recovery strategy of 57.4m while Nkana had 20.9m, which is ‘very deep’, according to Opta.

The score could have been probably worse for Nkana if not for their ‘Positive Actions’ in own box, which added up to 7 while Kotoko had just one.

While Kotoko had superior percentage attacks from wide positions, 70%, over Nkana, 60%, the Zambians had a slightly better width of play, 49.8m, above Kotoko’s 48.5m.

No team has qualified to the quarterfinals in Group C. Kotoko, who will also be playing at home in the next matchday (March 10), could move to top of the group with nine points if they defeat visiting Al Hilal. Nkana, on six points like Kotoko, are another strong candidate for the top spot but they must edge fellow Zambians, Zesco United, who won the first leg 2-0.