Dr. Lawrence writes: Stay on the message, print T shirts for “Do or Die” in 2024 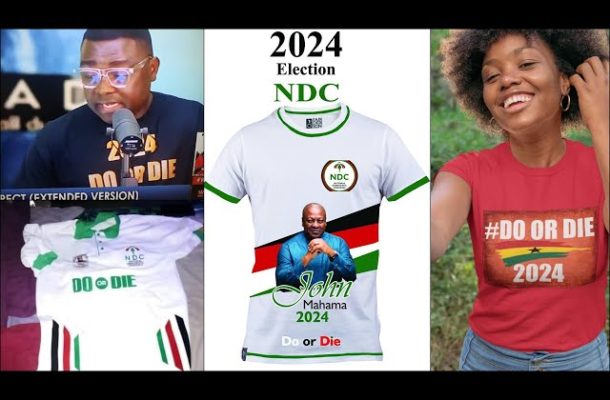 The way NPP is reacting to President Mahama’s “Do and Die” is like a man who bought a wild dog into his house after he had been robbed two times in two days. Then a man in the neighborhood went to every house seeking support to condemn the man for buying the dog. Who do you think was the one who robbed the man? Clearly, that man is the thief.

But the enthusiasm this “Do or Die” thing has created amongst the grassroots is not the end. We still have about three years to ensure the “Do or Die” becomes real.
I want to propose to the NDC what we will do to ensure that “Do or Die” doesn’t become just a slogan.

*2. Polling Agents.* NDC should be selective in appointing their Polling Agents in 2024. When I went round in 2020, I saw some Polling Agents who were between the ages of 15 to 18. These children could easily be sent to buy food or water. Even adults were sent out in 2020. Agents leaving their stations should never happen again.

I also realized that some Polling Agents were there because of the money and not because they were committed to their responsibilities. Some have been Polling Agents since 1992. They therefore see everything as “business as usual” They go there, drink tea and have fun.

*4. National Executives.* NDC should elect National Executives who will be committed to the “Do or Die” affair. We all know what happened at the Ayawaso by-elections after NDC had assured the grassroots that the NDC will match the NPP boot for boot. We can’t win 2024 if NDC doesn’t make it a “Do or Die” affair and we will need people who will lead and be committed to that fight of winning for JM and the NDC.

*5. The Hawks.* I will not talk more about the Hawks but the NDC should put on the table the idea of bringing back the hawks. Some of the results would have been different if we had people protecting the EC Officers and the ballot boxes. We know those who helped to change the results in favor of the NPP were not from the regular police and military. NDC was misled.

*To conclude.* Today’s date is September 12, 2021 and elections will be on December 7, 2024 but the earlier NDC start working on some of these proposals, the better. We should not wait until the last minute. I am not campaigning for or against anybody but those who have ears should listen, and remember that those who vote don’t decide anything. Those that count the votes are those that decide everything.

I have not started writing yet.
Mahama beba.
Dr. Lawrence is the Chairman of Friends of John Dramani Mahama (North America)