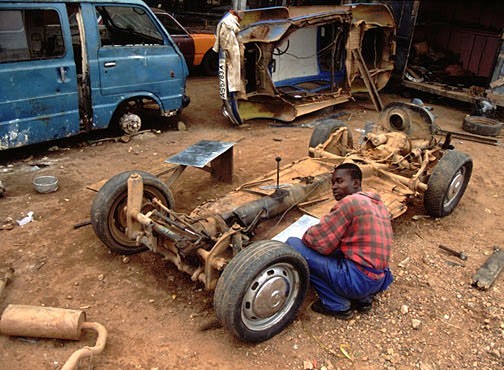 Artisanship in the country has indirectly been described as fruitless by sequential governments. This is according to some disappointed artisans in the Kumasi magazine.

The group of artisanal workers at the Kumasi magazine expressed a big time disappointment in the successive governments for continuously booting their works, and for that matter all artisanship in the country as worthless.

"Our keen observations from the various government since this 4th republic reveals and it's a clear indication that artisanal workers are usually left out in any consideration".

They backed their accusations by indicating that there's not a single government which has ever given encouragement for people to learn artisanship or apprenticeship since it's a recourse to education.

They also hinted that there's not a single trades and industries minister who has ever met to discuss general issues with real artisans on the ground, apart from visiting them during election times to garner votes.

Chief Executive Officer (CEO) for Daily Sure engineering services and treasurer for zone 18 garages in the Suame Magazine, Mr. Musah Malik a.k.a Wustars, speaking to ghanaweb.com expressed bitterness over governments' deliberate neglect on artisans and how the development is collapsing their work.

According to him, he's very much disappointed in the successive governments, especially the current Nana Addo's led administration for not seeing anything good in their trade, and deliberately making it unpopular as if their work is worthless.

Mr. Malik however pleaded with the government to focus on the automobile artisanship to promote and boost the economy.

He said, the taking over of artisanship from Ghana into our neighbouring countries like Togo, Burkina Faso, Mali, La Cote d'ivoire etc is adversely affecting the country when it comes to revenue generation.

He added said, these foreigners troop in to Suame Magazine to learn our traditional craft while our youths keep on choosing Western education after which most of them become a burden in the society after graduation due to unemployment.

"Most youth in Ghana are no more interested in learning artisanship or apprenticeship. This is because the government only keep on promoting secular education as if it's the only source of wealth. Most people acquire certificates and sadly come back to stay home.

Technical education, apprenticeship or artisanship have been totally discarded as if they are of no more use in the country. The government can do only one thing by just promoting the need for people to also choose technical or artisanship as another good option, and the youth will patronize," he added.

Chairman Wustars appealed to Ghanaian youth to also patronize apprenticeship or artisanship since it puts heavy bread on their future tables.

Mr. Kwame Amoa aka Chairman Z, Chairman for the Zone 18 adding his voice revealed that the situation has been very worrying.

He said these foreigners who come to learn from Ghana only do that to build it strongly for their future.

"We are sadly loosing our artisanship to foreigners. When we are dead today, who are to replace us in Ghana? Most Ghanaian youth are losing interest in learning apprenticeship or artisanship due to the government's inability to make them attractive. The media also has a bigger role in all these issues," he said.

The passionate Chairman suggested that the government can generate more revenue by constructing industrial villages for artisans across the country, and also make things attractive. "There's nothing one village one dam can do than doing these things that could benefit the country hugely," he asserted.

The Chairman finally called on government and the Minister for Trades and Industry, Alan Kwadwo Kyeremateng to immediately turn their attention to these calls and see how fast the economy grows.

"I can confidently tell you that about 90 percent workers here do not pay taxes due to these negligence," he said.