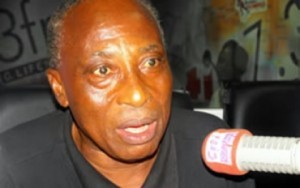 The former head of Government and Official Spokesperson for the erstwhile Armed Forces Revolution Council (AFRC), Retired Major Kwadwo Boakye Gyan  has stated that, upon releasing the Former of the Fourth Republic Jerry John Rawlings, he only speaks rubbish.

The former Major while speaking on Kumasi based Abusua FM has said that there are people who have actually shed blood for the National Democratic Congress (NDC) and not him.

“I released him from prison only for him to be talking rubbish. He has no moral right to be talking of shedding blood. There are people who have sacrificed so much for the party that he claims to have done” He said.

Rtd Major Boakye went ahead to point accusing finger at Mr Rawlings saying he was the downfall of the NDC at the 2016 general election that brought a major defeat to the then sitting government.

The Rtd Major said, “He was in bed with NPP to defeat the NDC. He is now rich and out of poverty. If he has graduated from social democratic values and now hanging out with his new friends he should go. Why will Nana Addo thank him……He should either be with us or without us now he has new friends defending them. I and Osahene brought him…l’m the father of the NDC because it came under the barrel of a gun and l fired the gun”.

He further added that, Mr Rawlings has lost nothing in his struggle for the NDC, this he says is because the former  President was to be killed and was saved, therefore he should be grateful.

“He is not serious…he has lost nothing…we saved his life because he was to be executed. He should be grateful. Now its fire for fire because the cover is broken. He is no longer a hero in the NDC. He is now an enemy to the NDC" the major added.

Mr Rawlings while speaking at the Art Centre in Accra over the weekend said he sacrificed his life for the NDC and added that the current members of the party lack integrity and will continue to to be truthful at any point in time without fear from the attacks that will come his way by unknown party members and will fight to bring the party back to power in 2020.

The AFRC was the government of Ghana from June 4, 1979 to September 24, 1979. It came to power in a bloody coup that removed the Supreme Military Council, another military regime, from power.