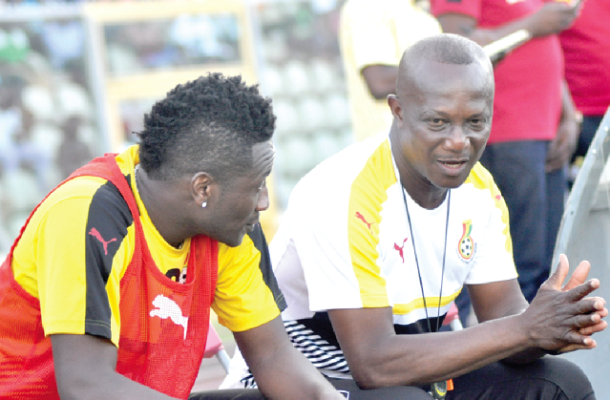 In May 2019, Asamoah Gyan released a statement rescuing himself from the team after a conversation with then-head coach Appiah revealed the armband was going to be taken away from him.

He also retired permanently from the national team so that his presence would not ‘fuel the purported undermining the country has seen under my captaincy.’

The decision was seen as one taken by the technical team, but Tanko claims no one knew what influenced the decision.

“I don’t know what happened before the tournament, honestly,’ the home-based Black Stars coach tells JoySports.

“It was his [Kwasi Appiah] decision. I don’t know what happened that took the captain from him [Asamoah Gyan] because no one within the technical team except Kwasi Appiah knew the reason why,” Tanko said.

Many had said that the team was disunited because of that decision, an assertion Tanko admits, saying it played a role in the country’s worst AFCON performance since 2004 as the team exited the competition at the round of 16.

“When we went to the tournament, you could see that there’s not too much involvement of him because of what happened before the tournament.

“He decided not to go before the President [Nana Addo] intervened on his behalf and we took him there. So, as to whether it was right or wrong, I can’t tell but we went with him and that resulted in us having the worst AFCON in long time,” he reckoned.

Tanko, who led Black Meteors to Egypt for the AFCON U23 tournament believes such decisiveness divides support for the national team and is hopeful lessons have been learnt.

“…because of what happened before we even left, there was no unity, but I am sure we have learnt our lessons so going forward we will do things better.”

When asked if a conversation on the future of Gyan at the national team should have happened after AFCON 2019, Tanko said it would have been great if that had happened.

“I am sure this is how it is supposed to be because when you qualify for a tournament, you need all the players and the nation behind you.

“Of course, Gyan has a lot of people who admire him, he has a lot of fan base, so when these things happen, you have divided the country and this was what happened before we went for the tournament, it doesn’t help us,” he opined.

Tanko was removed as Black Stars assistant coach after the tournament in Egypt and was replaced by CK Akonnor for the first two AFCON 2021 qualifiers.