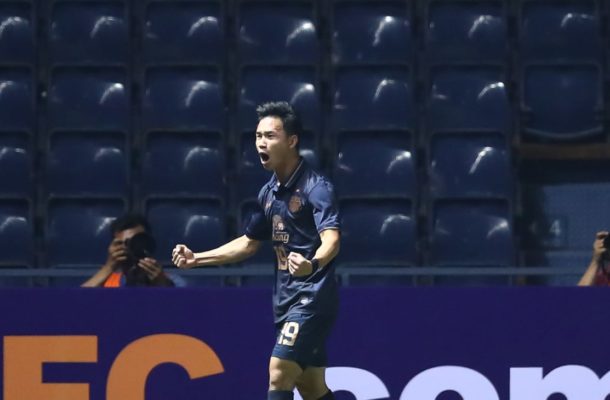 Buriram: Supachok Sarachat was delighted that his first ever AFC Champions League goal helped Buriram United earn their first three points of the 2019 campaign with a 1-0 Group G win over Jeonbuk Hyundai Motors on Wednesday.


The Thai champions had lost 3-0 at Urawa Red Diamonds on Matchday One while Jeonbuk came into the game on the back of a fine 3-1 victory at home to Beijing FC.

But Supachok’s second-half strike resulted in a reversal of fortune for both sides and put Buriram back on course to compete for a place in the Round of 16 for the second year in a row.

The 20-year-old attacking midfielder ran onto Pedro Junior’s through ball five minutes into the second half, drove into the penalty area and found the back of the net with a shot that went in at the near post.

“I was very happy to get on the scoresheet for the first time in the AFC Champions League,” said Supachok. “And I’m delighted that the goal helped the team take our first three points of the year in the competition.

“We knew it was going to be a really tough game against Jeonbuk and everyone worked really hard for each other and gave it everything. We ran non-stop for 90 minutes and in the end we got the result we deserved.”

50' GOAL! Buriram United take the lead! 1-0! Supachok Sarachart gives Buriram the lead after being played in by Pedro Junior. The forward shrugs off the defender before beating Song Beom-keun at his near post. #BRUvJEO #ACL2019 pic.twitter.com/05jLU2e8r4— FOX Sports LIVE! (@FSAsiaLive) March 13, 2019

The home side could have extended their lead as they dominated for a spell before Jeonbuk came back into the game and piled the pressure on the Buriram defence.

But the home side’s backline would not be breached despite an intense aerial bombardment from the wings and Buriram head coach Bozidar Bandovic felt the better side won.

“I want to thank my players for a great game, not only tactically and physically, but also mentally," said Bandovic.

A post shared by BURIRAM UNITED (@buriramunitedofficial) on Mar 13, 2019 at 8:15am PDT “I think we deserved to win this game. We played with discipline and passion and defensively we were excellent. In the second half, we scored the goal and if we had been more careful, we could have scored one or two more.

“But, of course, in the second half, the opponent risked more, they tried with their crosses but we did a great job. It’s a very big win for our team and for Thailand against one of the best teams in Asia.”

Buriram now sit joint second in Group G and they will next host Beijing FC on April 9. Jeonbuk will again be on the road in their next match as they travel to Japan to play Urawa, who currently top the standings.